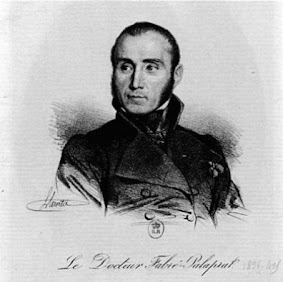 Within the Apostolic Johannite Church, today is the Feast Day of Dr. Bernard-Raymond Fabré-Palaprat who was an ordained priest, a medical doctor, worked as the court doctor of Napoleon I, was a recipient of the French Legion of Honor, discovered the Levitikon, restored the Knights Templar under the name of l'Ordre du Temple, and founded the Johannite Church.

Born on May 29, 1773, in Cordes-sur-Ciel, France, Bernard was the son of a well-known surgeon. Cordes-sur-Ciel is 25-km northwest of Albi, France, which was an epicenter for the Cathars and from which the Albigensian Crusade derived its name.

He studied at a diocesan seminary in Cahors and was ordained a priest with the Roman Catholic Church. In 1794, he left the priesthood and studied medicine in Montpellier and Caen and received his medical degree on April 12, 1798. That same year he moved to Paris and continued to study medicine and received another degree on September 16, 1803.

It was strange that he move there, but speaks to his character as most were fleeing Paris. It was in Paris that he met Jacque Phillipe Ledru, head of the French National Academy of Medicine and a fellow Mason. Fabré-Palaprat had joined the Masons in Paris and was a member of the Chevaliers de la Croix under the Grand Orient of France (when it was still recognized). They were friends and Brothers, and Ledru would go on to share something that would change Fabré-Palaprat's life.

On November 4, 1804, Fabré-Palaprat brought back to public light the Order of the Temple or Knights Templar. The medieval Knights Templar had been suppressed back in October 1307, but according to the Larmenius Charter or "Charter of Transmission," the Templars continued underground. The Larmenius Charter was named after Johannes Marcus Larmenius who was appointed to be the Grand Master after the death of Jacques DeMolay.

From that time forward, Grand Masters had appointed their successors down the line until Timoleon de Cossé, Duke of Brissac. The French Revolution of 1789 caused massive social upheaval that imprisoned many nobles and aristocrats to include the Duke. In 1792, many Revolutionaries in Paris believed that the political prisoners were planning a counterrevolutionary plot and so over a series of days bands of prisoners, to include the Duke of Bissac, were executed by the authority of "popular tribunals" (mob rule) which became known as the First Terror of the French Revolution or September Massacres.

It was a custom that after one's death in French culture for friends and employees to purchase properties and furnishings of the deceased to help liquidate estates or to help the widow with funds. Such was the case here when Jacque Phillipe Ledru, the Duke's former physician, purchased some of the Duke's furniture that just happens to contain the Larmenius Charter. Through a series of events, Ledru is offered to be Grand Master, but turns it down and the order falls under the regency of Claude-Mathieu Radix de Chevillon until Fabré-Palaprat's election as Grand Master in 1804. It should be noted that many in the Chevaliers de la Croix were also members of the l'Ordre du Temple.

This Templar order even received patronage and protection from Napoleon I. In 1808, at the anniversary of the martyrdom of Jacques DeMolay, the Knights Templar held a mass for him at the Church of St. Paul in Paris. The Templars then led a public procession through the streets of Paris to which Napoleon loaned a detachment of soldiers.

Fabré-Palaprat was awarded the rank of Chevalier in the Legion of Honor for assisting in the defense of Paris in 1814 when a coalition of forces sought to depose Emperor Napoleon attacked Paris. He also received the July Medal for his actions during the July Revolution of 1830.

In 1831, he published the Levitikon, a Gnostic version of the Gospel of John, which he is said to have found in a bookstore in 1814.

Dr. Bernard-Raymond Fabré-Palaprat died on February 18, 1838, and the regency passed to Sir Sidney Smith before going to Joséphin Péladan, a famous occultist, to some the "godfather of the French Rosicrucian societies" in his day, and a leader of the Ordre de la Rose-Croix, du Temple et du Graal (Order of the Rose-Cross, the Temple and the Grail). Dr. Fabré-Palaprat was a man of science, faith, and the study of the occult. He left behind an amazing legacy of Templar and Johannite revival and kicking off the era of Gnostic Restoration. There is so much of his life and work that I didn't cover, but to cover everything would take more time than I have available.

Here is a video by Father Donald Donato on the good Doctor:

4. Historical and Mythological Touchstones. (n.d.). Retrieved from Order of the Temple and Saint John: https://otsj.org/history-myth/