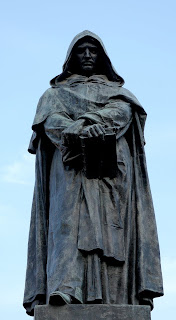 Today is the Feast Day of the Holy Martyr Giordano Bruno who was an Italian Dominican friar, philosopher, mathematician, poet, cosmological theorist, and Hermetic occultist.

Born at Nola in Campania, which was in the Kingdom of Naples, in early 1548, Giordano Bruno was originally named Filippo Bruno. Not much is known of his early life, but what is known was that at the age of 15, he became a Dominican friar. It was at this time that he took the name "Giordano

He was a voracious scholar that read books on many subjects and he even obtained his doctorate in July 1575. However, he was caught studying magic and had to flee Italy when the Inquisition condemned him around 1576. For the next 17-years, he traveled around Europe teaching and writing a number of texts such as the "Clavis Magna" and "Il Candelaio." One such text expanded upon the Copernican theory of a heliocentric universe. He raised the possibility that these planets might foster life of their own, a philosophical position known as cosmic pluralism. He also insisted that the universe is infinite and could have no "centre". Other texts were heavily occultic and all of which earned him the ire of the Roman Catholic Church.

During his travels, he was constantly seeking patronage, and finally, he received word that a Venetian nobleman desired to be his patron. In 1591 he traveled to Venice, but after two years the nobleman betrayed Bruno to the Inquisition and he was jailed for 6-years in Rome. His trial began in the Spring of 1599, but was condemned in January 1600.

On February 17, 1600, he was hauled in chains to the Campo de'Fiori outside the gates of Rome, where a stake had been set up and wood piled around it. The Papal soldiers tied him to the stake; after a few formalities, one of them threw a lit torch onto the pyre, and the cries of the doomed man blended with the roaring of the flames and the catcalls of the crowd. He died standing up for his beliefs in a time when free thought was a death sentence, and many define him as a martyr for science.