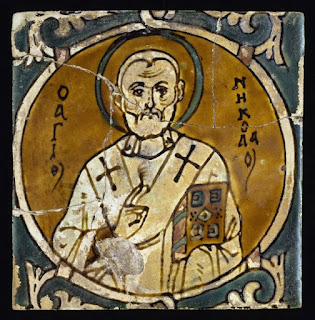 Today, Christians around the world are celebrating the Feast Day of Saint Nicholas who was a 4th Century Bishop of Myra and now considered the patron saint of Russia, Greece, several cities, sailors, children, merchants, travelers, victims of judicial mistakes, captives, archers, repentant thieves, brewers, pawnbrokers, the unmarried, pharmacists, and coopers. Known for his generosity and pension for secret gift-giving, St. Nicholas was the precursor to the modern figure known as Santa Claus in Western culture.

Little is known about the historical Saint Nicholas as the earliest accounts of his life were written centuries after his death and contain many legendary exaggerations. Ancient historical records were often kept on papyrus and parchment which was not very durable and often had to be rewritten onto new material to preserve it. Thus, it is not surprising that some of the earliest references to his name only trace to the 6th century. There are other such references as we know that Theodosius II and Justinian I dedicated churches to St. Nicholas. In the later middles ages, there were nearly 400 churches dedicated to St. Nicholas in England, 300 in Belgium, 34 in Rome, and 23 in the Netherlands; and was represented by Christian artists more frequently than any other saint, saving the Mary Theotokos.

Nicholas is said to have been born in a city called Patara, a maritime city a part of the Roman Empire (in what is now the city of Demre in Turkey) on March 15, 270 AD to two Christians named Epiphanes and Johane (some accounts name them Theophanes and Nonna). Nicholas lost his parents at a young age during an epidemic and was left a large inheritance, but because of his piety and faith, it is said that Nicholas used the wealth to help the poor and sick. I found one story stating that he was raised by his uncle who was the local Bishop. At some point in his youth, his uncle mentored him as a Reader and then later ordained him as a Priest of the church.

Around his 30th year, he made a pilgrimage to Egypt and the Levant to walk in the steps of Christ. On his return, he stopped through Myra. At the time, the clergy were in session to elect a new Bishop of Myra. The presiding bishop is said to have received a vision that whoever came first through the church doors at the hour of matins (a canonical hour before dawn) would be the new Bishop of Myra. As it happened, Nicholas was that man and at the age of 30 became a Bishop.

Nicholas served as Bishop during the religious turmoil of the late Roman Empire when Christians were still being persecuted. Under the reign of Diocletian (Emperor from 284 to 305), Nicholas was imprisoned and tortured. His incarceration lasted until Constantine assumed the imperial throne and released the Christians.

Some stories record that Nicholas attended the First Council of Nicaea (325 AD), but he isn’t mentioned in any writings by people who were actually at the council such as Athanasius of Alexandria or Eusebius. Some say that he was intentionally left off of the list because legend states that he slapped Arius for his argument that Jesus was divine, but not co-equal to God. For his aggression, Nicholas was said to have been defrocked and temporarily imprisoned, but was freed after the other clergy received a holy vision.

Known for his kindness, generosity, and piety, many legends are attributed to Nicholas which led to his canonization. The most famous concerns saving three daughters of a local man. Nicholas heard about a devout man who had lost his wealth and could not afford proper dowries for his daughters which, if remaining unmarried, would have been shunned and left to work as prostitutes or sold into slavery. Nicholas decided to help the father and save the girls. On three different nights, Nicholas left purses of money which allowed the father to arrange proper marriages for each of them. On the final night, the father followed and discovered that it was Nicholas who saved him and his daughters. Nicholas ordered the man not to reveal his charity and his scene is one of the most popular scenes in devotional art.

Other legends include Nicholas saving three men who were falsely imprisoned and sentenced to death. Another story recounts how Nicholas saved a ship he was on and held back a storm which caused Nicholas to become venerated as the patron saint of sailors. There is a legend that occurred during a famine when Nicholas was able to get wheat from maritime merchants without them losing their stores owed to the Empire, but enough to feed all in the area (feels reminiscent of Jesus’ miracle at the Wedding at Cana). Another legend tells how he resurrected three children, who had been murdered and pickled by a butcher planning to sell them as pork during a famine. This last legend is often depicted with Saint Nicholas with three naked children and a wooden barrel at his feet. This depiction became so widespread that many forgot the exact story and misrepresented it so Nicholas became the patron saint of children and, due to the barrels, patron saint of brewers.

Some scholars and critics believe that some of these legends originated in pagans and were then attributed to Nicholas. Counter arguments have been made that Nicholas’s opinion of women was more in line with that of 4th century Christianity when women played prominent roles in the movement before they were downplayed and subjugated in later centuries.

Nicholas lived until December 6, 343, where he died in Myra. Under Theodosius II, a new church was built and the remains of Nicholas were entombed there. By the 11th century, the Seljuk Turks were conquering the Holy Land and were making their way through Anatolia (modern Turkey). By 1087, the inhabitants of Myra were now under the subjugation of the Seljuk Turks. This combined with the Great Schism of 1054 which divided the Roman Catholic Church and the Orthodox Churches, prompted a group of Italian merchants from Bari to sail to Myra and remove the major bones of Nicholas’s skeleton from his sarcophagus without any ecclesiastical authority. They brought them back to Bari where a church, named Basilica di San Nicola, was erected and inaugurated by Pope Urban II. Nicholas’s popularity was such that when word was spread that his remains were in Bari, demands flooded the basilica and small fragments of his bones were dispersed around western Europe which also spread and promoted the cult of St. Nicholas. Several more bone fragments were taken from Myra by Venetian sailors during the First Crusade and placed in the San Nicolò al Lido monastery in Venice. Others have reported that some fragments were taken by Normans in the 12-century and taken to Ireland (County Kilkenny). It is noted that St. Nicholas has the most bones still preserved in one spot (the crypt in Bari, Italy).

Christians in the Middle Ages celebrated him as a gift-giver: children would leave out their shoes or stockings on December 5 and find coins within them the next morning. One legend had nuns using the night of December 6 to pass out food and clothes on the doorstep of the needy. Veneration for St. Nicolas continued throughout the Middle Ages, but stopped abruptly with the Reformation when Protestantism rejected the idea of honoring saints. 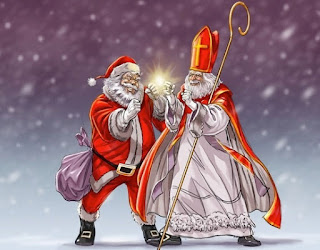 The memory and adoration of St. Nicholas were preserved in Holland (western Netherlands) whom they called “Sinterklaas.” The Dutch portrayed him dressed in the red robes and miter of a bishop who would give out candies and presents to the good children while the bad kids received coal or potatoes. The tradition of Sinterklaas followed the Dutch to the American colonies when they established New Amsterdam (now New York City). The name Sinterklaas changed to Santa Claus with the English-speaking majority of the colonies and instead of celebrating him purely on December 6, Santa Claus became a part of the Christmas Season in the US. The modern image of Santa being of a jolly old man in a red suit trimmed with white fur and the idea of him being transported by a magical reindeer-drawn sleigh was cemented in the 19th century with depictions and publications by cartoonist Thomas Nast and poet Clement Clarke Moore.

In much of Europe, St. Nicholas Day is still celebrated by the giving of gifts and merrymaking so as to preserve the focus on Christ during Christmas. Even though Christmas has been heavily commercialized in the US, we can still remember St. Nicholas as a great example of generosity and a model for compassion.

9. St. Nicholas Day: What is it & How is it Celebrated? (2020, December 3). Retrieved from FTD by Design: https://www.ftd.com/blog/share/st-nicholas-day-what-is-it-how-is-it-celebrated