Six A.M. came too soon Saturday morning when the alarm clock woke me up from my slumber. I headed down to the El Korah Shrine building (as it is better suited to host the ceremonies) to receive the degrees of the Ancient and Accepted Rite of the Scottish Rite, Southern Jurisdiction of the USA.
First, we had some breakfast and did a quick introduction to the Scottish Rite. We then went up to a side room where we sat with our class leader, the Venerable Master of the Lodge of Perfection, and awaited the call for us to the ballroom where the ceremony would be held. When we did, we went through the 4° - Secret Master. It was a well-done, solemn ceremony.

Then we got to the 5° - Perfect Master, but I refer to it as the "Broken Bench" degree. It started out well, but when one of the casting members sat down onto a bench it gave a slow, moaning creek and the last man to sit down is a rather large man. Five minutes didn't even pass and soon CRASH! Down they went, all those on the bench as the wood gave way beneath the combined weight. Then came the laughter from both the men on their backs and those sitting around the room. They finished the degree in fine fashion. After communicating the 9° - 13°, we were put through the 14° - Perfect Elu.
After communicating the 15° thru the 17°. I got to be the exemplified candidate during the 1st section of the 18° - Knight of the Rose Croix. It was a lot of fun and I had one of the more interactive parts as the active candidate.
After we finished with the 2nd section of the 18° we headed over to the Scottish Rite building just a few blocks away where we were communicated the 19°thru the 24°. It should be noted that while we went through the 24°, we still will be going through the 22° - Prince of Libanus on Day 2.

We were given a short break before the Open Bar Social Hour before the Cap & Roses Banquet commenced. The evening went great with some Makers & Cokes while chit-chatting with the families of the members and candidates; one of the wives is even interested in joining the Eastern Star! The candidates from both the Spring 2011 and my class were presented with their 32° Cap and rose for their lady, which we had many in attendance.

It was nice to sleep in a little today prior to finishing off the degrees. Prior to taking the 22° we were communicated the 25° through 29°. I really enjoyed the time we communicated as my class was an exciting one, full of laughter and quite a bit of knowledge. The 22° ceremony was an interesting one discussing the merits of labor, and some symbolism for humility.

The 30° - Knight Kadosh (the last of the degrees for the Council of Kadosh), was just as impressive symbolically as it was performed. Then it was time for the Consistory.

We were communicated the 31° - Inspector Inquisitor and the Personal Representative to Joe Alexander, 33° - the Sovereign Inspector General of Idaho, talked to us and prepared us for the 32°.

The 32° - Master of the Royal Secret was definitely the most impressive degree of the Scottish Rite.

I am still processing all of the information, but having already gone through the York Rite, I did see some similarities that filled in some spots where the York Rite had left empty. 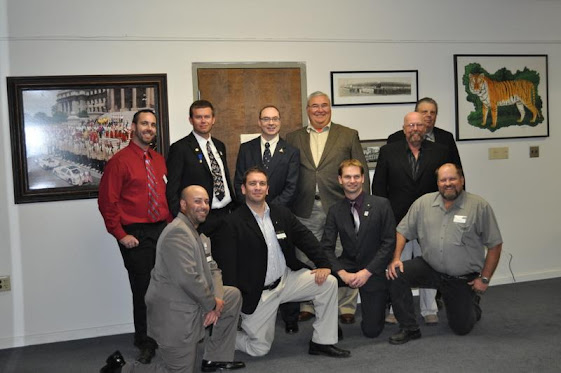