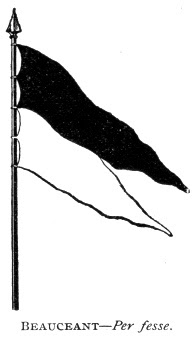 John J. Robinson, the author of Born in Blood, believed that 'beau' meant 'beautiful', and in medieval times it is said to have translated as 'glorious' or 'magnificent'. So in a battle cry 'beauceant' could mean 'be noble' or 'be glorious'.

The standard and its bearer are even relevant in today's military.  In the Fall of 2003, I was a Private First Class (PFC), I was assigned as appointed as the Standard, or rather Guidon, Bearer of my Company. As such, I was supposed to be one of the most knowledgeable in Drill & Ceremony and protect the banner.  The First Sergeant (1SG) was considered to be the Keeper of the Guidon and can be compared to the Marshall of the medieval Templars.  I had the honor of being the Bearer while we deployed and took part in the change of command ceremony where I handed off the Guidon to the 1SG who passed it to the outgoing Commander who handed it to the Brigade Commanding officer who passed it to the incoming Commander, back to the 1SG, and finally back to me, accepting it under the Command. This personal experience has given me a great appreciation for the office of Standard Bearer as well as the Standard itself.