Initiated into the Red Cross of Constantine

Well, today was an amazing day, a rainy day, but still a great day. I had the pleasure of being initiated into the St. Michael Conclave of the Order of the Red Cross of Constantine.

I received the first degree of the Order that of Knight of the Red Cross of Constantine. I joined along with another Companion and Sir Knight from the Boise York Rite bodies. The initiatory ceremony was presided over by Dale Winch, Past Sovereign, and a Past Grand High Priest. The Knight Companions put on a nice initiation.

After the initiation and meeting, we headed over to the Shriner's building to have an excellent dinner. The meal and drinks were great as was the company. Jim Herndon, a Past Grand Sovereign of the United Grand Imperial Council even stopped in on his way through Boise back to his home in SE Idaho.

I was told at the dinner that if I attend the Northwest Regional Assembly I will receive the appendant orders; the Order of the Holy Sepulchre and the Order of St. John the Evangelist. That is not until next Spring though where I have to travel up to Kennewick, Washington to receive them.

I'd like to thank my fellow Knight Companions for inviting me to this prestigious order. 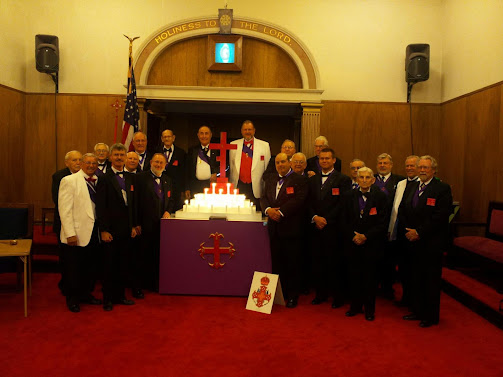