This post has been a long time coming.  I was going to have one large post, but I've decided to separate this into a series.  The Royal Arch degree is an amazing one with a great amount of symbolism and esoteric meaning.  I truly believe that all Master Masons should go through at least the Royal Arch as it completes the story of the 3° - Master Mason. 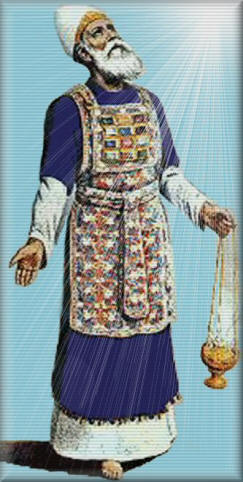 
The Breastplate is placed upon the ephod, or holy apron-like garment.  The square breastplate was inlaid with 12 precious stones, each representing the 12 Tribes of Israel, which were divided into four rows of three stones. This breastplate was also said to hold within it the two sacred divination stones, the Urim (representing light and excellence) and the Thummim (representing perfection and completion).


The First Row consisted of the following stones:


The Second Row consisted of the following stones:


The Third Row consisted of the following stones:


The Fourth Row consisted of the following stones:

On the High Priest's head is the white fine linen turban or mitre/miter. Round the base of the turban is the crown of gold, with the inscription "Holiness to the Lord".  The shape and look of the mitre may change and in today's world we see an evolved style of the mitre in the headdress of the Pope of the Roman Catholic Church.

Crowns, mitres, headdresses, hats, and so on have traditionally been symbols of authority or sovereignty.  Head coverings can also be seen as symbols of victory such as we see with the wreath or garland. For Christians the crown (and those who wear it) is said to remind us of the Crown of Thorns Christ wore as well as Christ being the King of Kings.


The 'tau' is the 19th letter of the Greek alphabet, but it is not the letter "T" in the English language.

This mystical character can be signified in a few different ways. First, the names Hiram of Tyre and Hiram Abif appear in the Phoenican language with the same letters “H” and “T” as they do in English. Therefore, the Triple Tau takes on the interpretation of the initial letters in Hiram Abif’s name.


Second, it signifies also T. H., Templum Hierosolym, the Temple of Jerusalem, and when used as the Royal Arch symbol, some jurisdictions teach that the wearer acknowledges himself a servant of God.

As a Christian I see a great deal of symbolism in this.  The use of 3 Tau's pertains to the Holy Trinity: Father, Son, and Holy Ghost. The 3 sides of the equilateral triangle represents the 3 great attributes of God:omniscience, omnipresence, and omnipotence. The circle is not always used or seen, but, to me, it is significance as it represents eternity and the immortality of God and the soul of man.


The tau in ancient times was regarded as a symbol of life.  It was also used as a symbol for those acquitted of a crime or honorably returning home from battle.  We also see use of it in the Bible wherein it is written in the Book of Ezekiel:


Stay tuned for Part 2 which I hope to cover the Banners, the Arch itself, and the Keystone. I will also discuss some of the lessons and duties taught in each of the degrees.