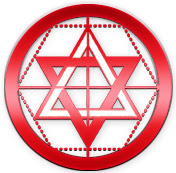 Martinism is named after Louis-Claude de Saint-Martin and is considered a mystical form of Christianity concerned with the fall of man, man's deprivation from the Divine, and his journey to reunite, or "Reintegrating", with the Divine, also known as illumination.  This tradition was first transmitted through a system of a "high Masonic rite" known as Ordre des Chevaliers Macons Elus-Cohen de l'Univers (Order of Knight Masons, Elect Priests of the Universe) established by Jacques de Livron Joachim de la Tour de la Casa Martinez de Pasqually (or more commonly referred to as Martinez de Pasqually) and which Saint-Martin was a member of.

Saint-Martin, born into a poor, but noble French family in 1743, first came upon the teachings of De Pasqually during his service in the French Army. As a result, he resigned his commission and moved to Bordeaux to be initiated into De Pasqually's Rite.  While serving as Secretary to De Pasqually he became knowledgeable on the teachings of the Order. He published many works, some of which would have a profound effect on Freemasonry, and all under the pseudonym "un philosphe inconnu" or "an unknown philosopher", from which time he has been referred to by this title. In some of his works, he laid out the plan he believed man should follow for Illumination, and placed an emphasis on Meditation and inner spiritual alchemy. Saint-Martin did not refer to these teachings as "Martinism", but rather called them "Voie Cardiaque" or a  "way of the heart".

Eventually, Saint-Martin would branch out on his own and teach his own mystic instructions separate from the Elus-Cohen. Surviving the French Revolution, Saint-Martin died in 1803 leaving behind his works and his initiates. Towards the end of the 19th century, the teachings took on a more structured organization with the assistance of Pierre Augustin Chaboseau and Gerard Analect Vincent Encausse (who is known by the pseudonym of "Papus").  This order was referred to then as "Le Ordre Martineste". These two men had set upon this endeavor as they feared the oral traditions that had been passed down by Saint-Martin had been altered as they both found each had been initiated by two different links stemming from Saint-Martin and, finding some inconsistencies in the transmissions, they wanted to preserve the teachings in a more consistent environment to enable them to further spread the message.

Since this time, and with the emergence of the Internet, many other Martinist groups have come into being with some differences in the number of grades and structure.