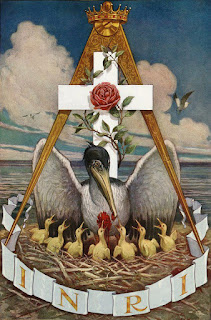 Those who are members of the Scottish Rite should recognize the Pelican from the 18°, or Knight Rose Croix, that teaches us practice virtue that it may produce fruit, labor to eliminate vice and purify humanity, and be tolerant of the faith and creed of others. The jewel of this degree has on the reverse, a pelican, piercing its breast to feed its seven young in a nest under it. To the Scottish Rite Mason, the pelican symbolizes every philanthropist and reformer who has offered up his life for the benefit of humanity, and so teaches us a never-ending munificence toward all men, especially the needy and defenseless. It also represents the large and bountiful beneficence of nature, from whose bosom all created things draw their sustenance. The pelican has been adopted as an icon by several cultures, groups, organizations, and religions around the world to include the Christian religion.


The name comes from the Ancient Greek word 'pelekan' (πελεκάν), which itself is derived from the word 'pelekys' (πελεκυς) meaning "axe". In classical times, the word was applied to both the pelican and the woodpecker. Pelicans are a large water bird from the family Pelecanidae. They are characterized by a long beak and large throat pouch used in catching prey and draining water from the scooped up contents before swallowing. They have predominantly pale plumage except for the Brown and Peruvian Pelicans. The bills, pouches and bare facial skin of all species become brightly colored before the breeding season. The eight living pelican species have a patchy global distribution, ranging from the tropics to the temperate zone, though they are absent from interior South America as well as from polar regions and the open ocean. They are an ancient animal, fossil evidence dating them back as far as 30-million years. They also have a long history of significance in mythologies.


To the Christian, the Pelican represents the Savior hat the pelican feeds her young with her blood, as the Savior shed his blood for mankind; and hence the bird is always represented as sitting on her nest, and surrounded by her brood of young ones, who are dipping their bills into a wound in their mother's breast. Centuries ago some fabled that:


"It is said, if it be true, that the pelican kills its young, and grieves for them for three days. Then she wounds herself, and with the aspersione of her blood resuscitates her children."

The Pelican was seen as a natural symbol of Christ. There are also variations that believe it was the male pelican that killed the young and then the female brought them back. Variations of this legend are also found in India and this legend though long preceded the establishment of the Christian faith. Dante Alighieri refereed to Christ as "our Pelican" in the Divine Comedy. Some believe the myth of a pelican feeding blood to her young stems from the Dalmatian Pelican which has a blood-red pouch in the early breeding season. Some also state that because the pelican collects and stores in its bill it must force it against its breast to get the contents out which makes it appears as if it is stabbings itself to feed its young.

To the ancient Egyptians, the Pelican is associated with death and the afterlife. It was also used as a protective symbol against snakes.

Pelicans are found heavily in heraldry, particularly with Christian heraldry, for reasons as explained above. It is used as a national bird for Romania as well as countries in the Caribbean and, here in the US, the Pelican is closely associated with the State of Louisiana.

Aside from the more known sacrificial symbolism, the Pelican is seen also as a symbol of nourishment, opportunism, healthy relationships. One can observe the pelican flying as a group around fisherman intent on using the efforts of the fisherman to accomplish the goal of nourishing the group. This animal has also been used as a symbol for constancy, preparation, magic, focus, wisdom, safety, humility, charity, humanity, nurturing, direction, resources, generosity, camaraderie, friendliness, and responsibility.


It was and is used by alchemists. This bird was associated with the Philosopher's Stone and the stages of transformation. The red stage is the feeding stage and the predecessor to rebirth and associated with the majestic pelican. The pelican also symbolizes making sacrifice to perfect one's inner self. In his book, The Birds in Alchemy, Adam McLean states:


"The alchemist must enter into a kind of sacrificial relationship with his inner being. He must nourish with his own soul forces, the developing spiritual embryo within."

This bird has been adopted by the Masons as a symbol used most notably in the Scottish Rite, but is said to have been seen in early Knights Templar Encampments (today known as Commanderies). Let us all remember the lessons of self-sacrifice of the Pelican that we may transform into a better man emblematically represented by the resurrection of the Phoenix as reminded by the 18° of the Scottish Rite.

7. Saunders, William. The Symbolism of the Pelican. n.d. http://www.catholiceducation.org/articles/religion/re0682.html.