I am honored to have presented this paper tonight at the annual collation dinner of the Wyoming College of the Societas Rosicruciana in Civitatibus Foederatis: 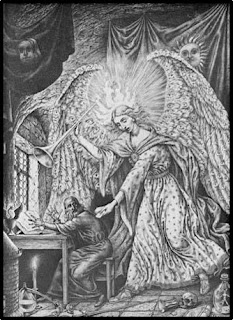 I was inspired to write this paper while I was reading the Chymical Wedding of Christian Rosencreutz, one of the three founding documents of Rosicrucianism. The Chymical Wedding of Christian Rosencreutz, attributed to Johann Valentin Andreæ, is a story of self-improvement through initiatic rituals that our legendary founder goes through that is composed seven chapters or days. On the first day, Christian Rosencreutz is visited by a divine messenger who is described as a “wonderfully beautiful female figure, dressed all in blue, spangled liked the heavens with golden stars”. Of all the symbols and allegories found within the Chymical Wedding, the clothing of this divine messenger caught my attention and the purpose of this paper will be the comparison of this star-spangled clothing to other myths and legends. It was interesting to see when researching these various mythoi that in the Gnostic traditions “garment” not only meant clothing, but also the flesh of the body as I’ll explain further along in this paper.

In the Roman Cult of Mithras, Mithras is said to have worn a cloak that was covered with the with constellations and the symbols of the seven planets. The stars on the cloak were said to represent every person that ever was and will ever be. This cult centered on the Proto-Indian, Persian god Mithra (Mithras being the Greco-Roman spelling). The son of Ormuzd, a god of light, Mithras is said to have been born out of a rock on the Winter Solstice. Myth states that he was born wearing a Phrygian cap and the celestial cloak while holding a dagger and a torch of light. 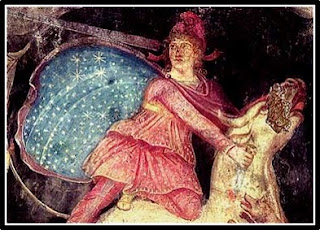 One of the central legends of the Mithraic Mysteries is the "Tauroctony". The Tauroctony, from the Greek word "tauroktonos" meaning "bull killing," concerns the myth where the god Mithras sacrifices a sacred bull. Ahura Mazda, the supreme god of Zoroastrianism, is said to have sent a crow, an animal traditionally used a messenger of the gods, to Mithras and ordered him to subdue and kill the bull, which was Ahura’s first creation, in a cave which resulted in the creation of all the plants and animals of the world. Upon the death of the bull, legend states that Mithras transformed his cloak into the sky. 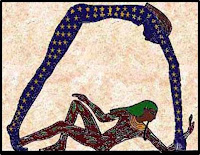 To the Ancient Egyptians, the body of the sky goddess Nut, who arched over the earth, was covered in the heavenly bodies; some legends say she is naked and others say she clothed in blue bedecked with the heavenly bodies. It is said that the sun, moon, and stars moved across her body, starting at her feet and ending at her mouth where she would consume them and pass through her along an “inner sky” to be birthed out of her at their appointed time; sun at dawn and stars and moon at dusk.

Nut is an enigma because in most mythologies there is a sky god and an earth goddess, but, in this case, Nut is the goddess of the sky while her consort, Geb, is the god of the earth. From the union of Nut and Geb came Isis, Osiris, Set, and Nephthys. Nut is also considered a protector of the dead. To invoke her protection, she was sometimes carved or painted on the underside of coffin and sarcophagi lids. 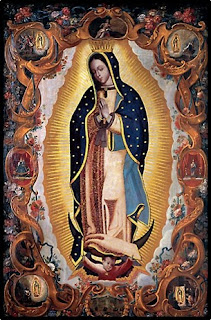 Within Catholicism, there are some interesting figures, particularly in new world areas where the Church wished to smooth the transition from the native pagan religions to Catholicism. The Virgin Mary is depicted in a variety of ways in Latin America. One such way is with Our Lady of Guadalupe.

Our Lady of Guadalupe, sometimes called the Virgin of Guadalupe, is a reference used for the Virgin Mary in Mexico. The Virgin of Guadalupe is enshrined at the Minor Basilica of Our Lady of Guadalupe in Mexico City. In this depiction, she wears a mantle covered in stars. Her mantle was colored as blue-green which was considered the color of the gods by the natives. The stars were said to denote that she came from Heaven. While this is contested, some theorize that the 46 stars that cover her mantle are said to correspond to the position of the stars of the winter solstice of 1531 when the legend of this particular personification of the Virgin Mary is said to have originated.

According to legend, the story of the Lady of Guadalupe dates to December 9, 1531, when Juan Diego, a Christianized native was on his way to Catholic mass when he received a vision from a lady who declared herself the Virgin Mary and The Lady of Uruk, sometimes called the “Sumerian Mona Lisa” is a statue that dates back to circa 3100 BC and is one of the earliest representations of the human face. Many believe it is a statue of the Inanna, goddess of love, fertility, and warfare in Sumerian mythology; an interesting dichotomy for a goddess to have. [expand on Inanna]whose garments were like the sun in their brilliance. She asked him to erect a temple dedicated to her on Tepeyac Hill. Some see this as a victory of Christ over the former pagan temples built on that hill. She assured Juan Diego that she would give love, aid, and protection to the people. 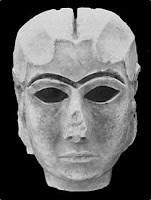 The Lady of Uruk, sometimes called the “Sumerian Mona Lisa” is a statue that dates back to circa 3100 BC and is one of the earliest representations of the human face. The statue depicted a woman that was wearing a garment that was "covered in golden stars”. Sadly today, the only thing left remaining is the facial portion and is now known as the Mask of Warka.

Many believe it was a statue of Inanna, goddess of love, fertility, and warfare in Sumerian mythology; an interesting dichotomy for a goddess to have. Inanna is said to be another name for the Akkadian goddess Ishtar, Phoenician goddess Astarte, Aphrodite in Greece, and Venus in the Roman pantheon. Inanna is said to be “clothed with the heavens and crowned with the stars” with the “rainbow as her necklace and the zodiac as her girdle.” Among her several titles she was known as the Queen of Heaven and Earth, Light of the World, Morning and Evening Star, and Holy Shepherdess. She was the protector deity of the city of Uruk was the first city built by the legendary Gilgamesh, who was the champion of the goddess Inanna.

In Hinduism, Ratri is the goddess of night. She is the sister of Ushas (goddess of the dawn), brother of Parjanya (god of rain), and daughter of Dyaus (god of sky) and Prithvi (goddess earth). She is also said to be “the guardian of eternal law and order in the cosmos and of the waves of time.” While her physical appearance is rarely discussed, the few accounts state that she is clothed in a black cloak and covered in stars. The stars on her cloak are there to provide light in the darkness as a means of protecting people from the dangers of the night. 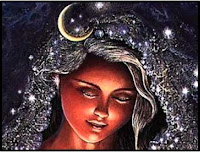 Another legend in Hinduism centers on Harishchandra who was a legendary Indian king. In one story, Harishchandra gave away his kingdom then sold himself and his family into slavery to fulfill a promise he had made to the sage Vishvamitra. While in servitude he demonstrated sincere remorse for his past sins and his obligations to the gods where the gods restored his fortunes and robed him in celestial garments.

I found a curious story in Chinese mythology concerning Chin Nu. Chin Nu was a weaver goddess and daughter to the Jade Emperor for whom she is said to have woven seamless robes. One story she is found in, concerns her descending to the earth to bathe. While bathing, her clothing is stolen by a cowherd and without her divine clothing she is incapable of returning to heaven. To get her clothing back she consents to marrying the cowheard, but eventually they become separated. The husband, with the help of the ox, searched the heavens for his wife. When he encountered her father, the Jade Emperor, but he refused to allow them to be together all the time as she would forget to perform her duties. The Jade Emperor instead gave her husband a place as guardian of Ch’ien Niu, a star to the west. Chin Nu was given a star that was situated to the east of the Heavenly River. Because of their positions in the heavens, they are only reunited on the 7th day of the 7th month each year. 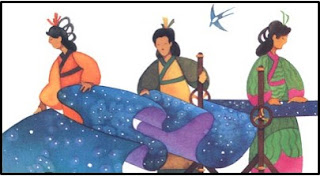 Shapur II, the 10th and longest reigning monarch of the Sasanian Empire, is said to have clothed himself in a “mantle and tiara were adorned with stars and with solar and lunar signs”. While not necessarily a divine being, monarchs are often considered divine or rule by divine right and were referred to as "illustrious" or "shining" (think of King Louis XIV who was known as the Sun King). During the wars with the Roman Empire, Shapur II sent a letter to the Emperor Constantius stating that he was the “Companion of the stars, Brother of the sun and moon”. Along with military and strategic renown, it was under the reign of Shapur II that the Avesta collection was completed. The Avesta is the primary religious text of Zoroastrianism. 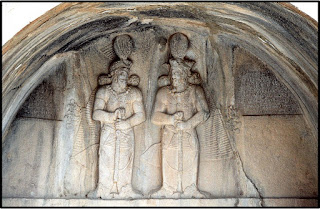 To conclude, among the various mythologies that have existed there are a number of mythologies that include divine or celestial clothing. A common theme that is seen among these different myths are that those who are garbed in celestial clothing are creators and guardians whether of the cosmos and mankind. Even the everlasting JHVH is described in heavenly clothing in Psalms 104:2 “Who coverest thyself with light as with a garment: who stretchest out the heavens like a curtain”. Again, thank you all for giving me this opportunity to speak tonight.