Justices of the Supreme Court and Freemasonry, Part 1

As it is usually the Executive Branch that has received the most focus as to whom held Masonic members there is little discussed on Justices of the Supreme Court. Conducting research for this group was difficult as the published works conflict with each other and primary sources are very scarce when researching the earliest Justices and there is little written today about more recent Justices who would have been Masons. Looking at all the sources, roughly one third of the Supreme Court Justices have been Masons. Bro. Paul Bessel put it nicely with:


"This might be just an interesting statistic, if they were Masons in name only, and some probably were. However, it appears that several were Masters of their Lodges, and some were Grand Masters of their Grand Lodges. Undoubtedly, then, the philosophy and spirit of Freemasonry had some effect on them, as well as the other Masons on the Supreme Court. This, in turn, may mean that to some extent the decisions of the Supreme Court, which have had so much of an impact on the lives of all Americans, reflect some of the teachings of Freemasonry."

To gather the names, I pulled from Paul Bessel's website, 10,000 Famous Freemasons, and the Masonic Info website primarily with other reputable sources at my disposal. This article is split into three parts and this first part will cover only those Freemasons who served as Justices of the Supreme Court of the United States of America during the 18th century. 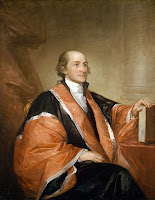 Although there exists no evidence, John Jay is listed as a Mason in 10,000 Famous Freemasons. John Jay was born Dec 12, 1745, but in contrast to many of the Founders of the US, he was a child to French Huguenot refugees rather than British citizens. He attended King’s College (now Columbia University) where studied law in his final year. John Jay is most known as the first Chief Justice of the US Supreme Court, but is considered a prominent figure of the Revolutionary times as he was a member, and President for 2-years, of the Continental Congress; Minister to Spain; signer of the Treaty of Paris; US Secretary of Foreign Affairs; was one of the authors of what would be known as the Federalist Papers; and served the people of NY as Governor. Many believe that John Jay was a Freemason as he wrote to Washington on April 21, 1779:

The dissolution of our governments threw us into a political chaos. Time, Wisdom and Perseverance will reduce it into Form, and give it Strength, Order and Harmony. In this work you are (in the style of your professions) a Master Builder, and God grant that you may long continue a Free and Accepted one.

There is also question as to whether John Rutledge was also a Mason or not. He received his education from his uncle Andrew Rutledge, South Carolina’s Speaker of the Common House of Assembly, and helped kick start his journey to a political career. After spending three years in England for law school, he returned to South Carolina. John Rutledge is known for being a Governor of South Carolina and delegate to the Constitutional Convention. He was also a member of the 3rd committee created to propose designs for the Great Seal of the US. He was appointed by George Washington to the Supreme Court. He took over as Chief Justice after John Jay resigned to serve as Governor. He was appointed during the recess of the Senate, but was removed after the Senate reconvened or his public rejection of a Treaty that Jay had supported. According to Paul Bessel, "Masonic Trivia and Facts and The MSA 1940s study say he was a Mason, without identifying his lodge, but 10,000 Famous Freemasons does not list him." 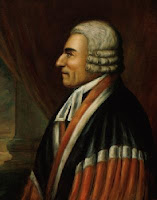 The longest of Washington's appointees, William Cushing served as an Associate Justice for nearly 21-years. Cushing was born in 1732 to a long line of Massachusetts jurists. He attended Harvard for theology, but changed to law. He also served as Attorney General for Massachusetts, Massachusetts Superior Court judge and Chief Justice, a founder of the American Academy of Arts and Sciences, and President of the Massachusetts convention that ratified the US Constitution. He was appointed to the US Supreme Court on September 24, 1789. He is remembered for the shortness of his opinions, one of them being only two sentences. His health was never the best. After John Jay's resignation, he was offered the position of Chief Justice, but he declined the offer. He remained on the bench until his death in 1810 and was buried in a small cemetery in Scituate, MA, which is now a state park. He is said to have been a member of St. Andrew's Lodge in Boston. 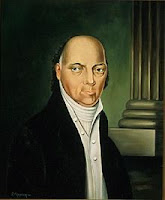 John Blair is remembered as a US Supreme Court Justice and member of the Constitutional Convention. He was a famous legal scholar who seems to have avoided dealing with state politics and preferred to remain behind the scenes. He is not remembered so much for his contributions at the Constitutional Convention, but rather for his time as a jurist on the Virginia Court of Appeals and later the US Supreme Court, where he influenced the interpretation of the Constitution in a number of important decisions such as the case of Chisholm v. Georgia in 1793, which held that a state could be sued in federal court even if it objected to the suit. The outcry at this opinion led to the adoption of the 11th Amendment in 1798. Blair resigned from the Supreme Court on October 25th, 1795, and died in Williamsburg in 1800. In Freemasonry, was unanimously elected as the first Grand Master of the Grand Lodge of Virginia in 1778. 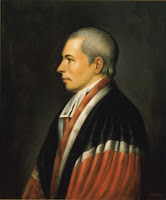 Serving as the 2nd Governor of New Jersey, US Senator, and one of the signers of the US Constitution, William Paterson also served as Associated Justice of the United States Supreme Court from 1793 to 1806. He entered the College of New Jersey (now Princeton University) at age 14. After his graduation in 1763, he studied law with the prominent lawyer Richard Stockton. After Independence, Paterson was appointed as the first Attorney General of New Jersey, serving from 1776 to 1783. He was sent to the Constitutional Convention in Philadelphia where he proposed the New Jersey Plan for a unicameral legislative body with equal representation from each state which was struck down and later replaced with the Great Compromise that established a bicameral legislative body. As a member of the Senate Judiciary Committee, he played an important role in drafting the Judiciary Act of 1789 that established the federal court system. The first nine sections of this very important law are in his handwriting. George Washington nominated Paterson for the Supreme Court on February 27, 1793. The nomination was withdrawn by the President the following day since Washington had realized that since the law creating the Supreme Court had been passed during Paterson's current term as a Senator, the nomination was a violation of Article I, Section 6 of the Constitution. Washington re-nominated Paterson to the Court on March 4, 1793, after his term as Senator had expired. He was immediately confirmed by the Senate, and received his commission. He served until his death on September 9, 1806. He was initiated as an Entered Apprentice Mason and passed to the degree of Fellow Craft Mason on May 17, 1791, and was Raised to the Sublime Degree of Master Mason on November 7, 1791, in Trenton Lodge #5 (now Trenton Cyrus Lodge #5). 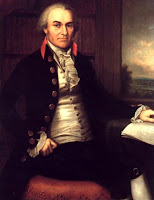 The third Chief Justice of the Supreme Court was Oliver Ellsworth. Born and raised in Connecticut, Ellsworth attended Yale in 1762, but later went to Princeton and graduated in 1766 with honors. It was at Princeton that he became a member of St. John's Lodge on December 27, 1765. In 1771, he was admitted to the bar and worked as a lawyer until 1778 when he was selected to be a delegate to the Continental Congress where he served until 1783. In 1784, he was appointed as a Judge in the Superior Court of Connecticut, but served in the position for only 3-years as he would be sent to represent Connecticut at the Constitutional Convention, but was unable to sign the Constitution. Before serving on the Supreme Court, he served as a Senator from Connecticut from 1789 to 1796. On March 4, 1796, Ellsworth was confirmed as Chief Justice of the Supreme court where he served for 4-years before resigning due to failing health.

16. William Paterson. (n.d.). Retrieved from Oyez: https://www.oyez.org/justices/william_paterson
Posted by Barry at 1:12:00 AM