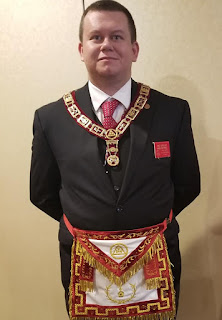 Friday afternoon I was honored to be elected and installed into the office of Most Excellent Grand High Priest (MEGHP) of the Grand Chapter of Royal Arch Masons of Idaho. For non-Masons with their eyebrows raised at the name, this position denotes that I am the presiding officer only. I do not carry any ecclesiastical authority or duties with this position. The title commemorates the legend of Royal Arch Masonry, that of the second building of King Solomon's Temple where the High Priest, not the monarch, presided over the high council that oversaw the construction. I’d like to thank the Companions for vesting their confidence in me to serve as Grand High Priest for the ensuing year. It is an extreme honor and I hope to fill the shoes of all those who have preceded me. I'd also like to thank my installation team: Johnny Willis, PGHP of Idaho; David A. Grindle, PGHP of Idaho; James C. Herndon, PGHP of Idaho; and Joe MacIntyre, MEGHP of WA. Each one of them has had a significant impact on my Masonic career.

Friday night, the Divine Service & Necrology Report was held followed by the Holy Land Pilgrimage Benefit Dinner. After dinner, Tri-Valley College No.178 met for its annual stated meeting where I was elected and installed as the Pre-Eminent Governor (the presiding officer). Today has been such a monumental day in my Masonic journey. After such a long day, it was time to relax with some scotch and brotherhood. 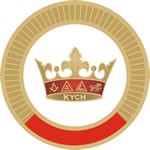