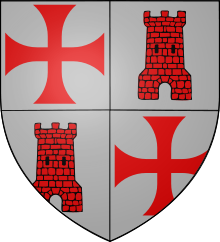 The Ninth Grand Master of the Knights Templar was Arnold of Torroja was governed the order from 1181 to 1184. Most of Torroja's Templar career was in Spain where he took part in the Reconquista. His reign is marked by quarrels between the Knights Templar and Knights Hospitaliers, the latter of whom had reached a new peak of influence in the Holy Land and Western Europe.

There is no known date of birth for Torroja, but it is believed that he was born around 1110/1111 AD somewhere in Catalonia (northwest Spain). Prior to serving as Grand Master, he served as Master of Provence and Aragon (Spain). Torroja was elected as Grand Master when the previous one, Odo de St. Amand, had died while in captivity sometime in 1180 AD. As mentioned before, Torroja spent most of his time in Spain and was considered an outsider which some believe would positively influence his election. St. Amand had become too involved with the politics of the Holy Land and many Templars saw this as a problem. Due to his appearance as an outsider and an impartial arbitrator, many groups used him to mediate disputes.

The Knights Hospitalier had reached a pinnacle of influence during the governance of Torroja and there had been a growing rivalry that was mediated by Pope Lucius III and King Baldwin IV of Jerusalem (known as the Leprosy king). Such factionalism among the Christians was bad during the growing strength of Saladin.

During a truce between Saladin and Baldwin, Torroja went on a tour of Europe with Patriarch Heraclius and Roger des Moulins, Grand Master of the Hospitaliers, to get more soldiers for another crusade, Torroja fell ill and died on September 30, 1184. It is believed that he was buried at the San Fermo Maggiore church in Verona. He was succeeded by Gérard de Ridefort.
References

4. Read, P. P. (2014). The Templars: The Dramatic History of the Knights Templar, the Most Powerful Military Order of the Crusades. St. Martin's Press.