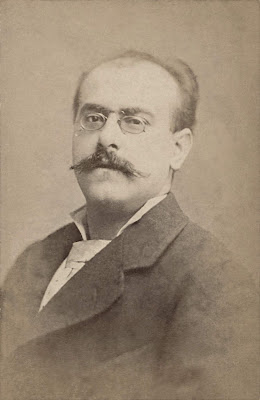 One of the biggest hoaxers to plague Freemasonry and fuel the fires of anti-Masons is Marie Joseph Gabriel Antoine Jogand-Pagès, or more commonly known as Léo Taxil, who was an infamous anti-clerical writer known for his blasphemous and obscene publications against the Roman Catholic Church. He penned many works that were later found to be fictitious, and have caused an unfounded uproar by anti-Masons. In the publications of this hoax, Taxil spun a tale about a Palladium Rite which was said to have practiced murder and devil worship among other things. While he aimed at humiliating the entire Craft, Taxil seems to target Albert Pike, a famous Scottish Rite Mason in the US. Even though Taxil admitted to making it all up in 1897, anti-Masons are far too eager to use his quotes in their agenda to defame Freemasonry.

Leo Taxil was born in Marseilles, France, on March 21, 1854. At the age of 5, he was sent to be raised at the Jesuit Seminary in the hopes of him becoming a priest. Something occurred during his childhood that caused him to become embittered towards religion and he turned completely against the Roman Catholic Church. After he left, he took on a career of what is today called "Yellow Journalism" which is "journalism that is based upon sensationalism and crude exaggeration." Most of his publications were pornographic and were aimed at the Roman Catholic Church and specific clergy to include the Pope. Some of his anti-Catholic publications were known as Amusing Bible for Grown-Ups and Children, Debauchery of a Confessor, Sacred Pornographers, and  The Mistresses of the Pope. By 1876, Taxil had been put on trial thirteen times and, outside the law, had to face several duels over his publications. However, his tabloids were selling and he had made enough money to pay the court-ordered fines.

In 1881, Leo Taxil petitioned to the Freemasons in France. While some opposed his admission, he made it through the West Gate, but he was expelled from the Craft as an Entered Apprentice for reasons that I cannot find. Taxil now had a new target: Freemasonry. Freemasonry towards the end of the 19th century was growing in popularity and was ripe for scandal. Not long after, sometime around 1882, Taxil feigned piety, rejoined the Roman Catholic Church, and declared that as part of his penance he would repair the damage done to the church.

Taxil would go on to write "The Devil in the 19th Century" which he said exposed a secretive Masonic order known as the Palladium Rite, which was he had invented himself. Palladium Masonry was said to be the very top of the Illuminati pyramid and the overseer of all Masonic rites and practiced Devil worship, murder and other perversions of a sexual nature.

In "Les Mysteries Franc Maconnerie" uses a rendering of Baphomet drawn by Eliphas Levi and adds to it to further attack Freemasonry. In his version, a group of Masons dances around Baphomet while a woman in the left-hand corner holds up a severed head.

In 1894, the book, "La Femme et L'Enfant dans la Franc-Maconnerie Universal" would be published by Abbe Clarin de la Rive. The cover of this book depicts a woman being seduced by Baphomet in between the two pillars prized in Freemasonry.

Taxil released another book called the "Devil in the Nineteenth Century" which introduced the anti-Masonic world to Diana Vaughan, who supposedly was a descendant of the 17th century Rosicrucian Thomas Vaughan. The book is filled with her supposed encounters with demons and Satanic rituals in Freemasonry. As a girl, she was betrothed to the demon Asmodeus. Later she would attend Palladium meetings held in Charleston and was consecrated as High Priestess by Satan with Albert Pike in attendance. Taxil then came up with a plot twist that Diana Vaughan converted to Roman Catholicism after Albert Pike ordered to "spit upon and stab a consecrated host" in a Masonic rite and utter blasphemies. Diana refused, repented, left Palladism, and wrote her book in penance.

One entire volume he devoted to Female/Co-Masonry where he wrote a number of fabrications which were received with delight by the Roman Catholic Church who used it as further justification for their negative opinion of Freemasonry. Another book claimed that all Freemasons are murderers, either in spirit or in fact. He claims that "higher degrees" Masons must go through a sacrificial ritual using a sheep. He went so far as to say that Masons practice spiritualism where Masons transfigured furniture into crocodiles.

In 1894, Abbe de la Rive  published La Femme et l'Enfant dans la Franc Maconnerie Universelle in which he attributes the following quote to Albert Pike who was supposedly the Sovereign Pontiff of Universal Freemasonry and supposedly addressed the 23 Confederated Supreme Councils of the world on July 14, 1889:


"That which we must say to the world is that we worship a god, but it is the god that one adores without superstition. To you, Sovereign Grand Inspectors General, we say this, that you may repeat it to the brethren of the 32nd, 31st and 30th degrees: The masonic Religion should be, by all of us initiates of the higher degrees, maintained in the Purity of the Luciferian doctrine. If Lucifer were not God, would Adonay and his priests calumniate him? "Yes, Lucifer is God, and unfortunately Adonay is also god. For the eternal law is that there is no light without shade, no beauty without ugliness, no white without black, for the absolute can only exist as two gods; darkness being necessary for light to serve as its foil as the pedestal is necessary to the statue, and the brake to the locomotive. "Thus, the doctrine of Satanism is a heresy, and the true and pure philosophical religion is the belief in Lucifer, the equal of Adonay; but Lucifer, God of Light and God of Good, is struggling for humanity against Adonay, the God of Darkness and Evil."

Pike remains the favorite "whipping boy" of the anti-Masonic movement who often exaggerates his importance and misquote (cherry-pick) Morals & Dogma. Many fabrications, such as this one, came out after his death; it's easy to spread a lie about someone when they can no longer defend themselves. The problem with this supposed quote is that 99% of those who join the Scottish Rite make it to the 32° and there have been millions of Scottish Rite Masons. As Brothers Arturo de Hoyos and S. Brent Morris said, "Is it believable that the millions of Scottish Rite Masons during the last two centuries could be cowed into such total silence?" or "Why would Albert Pike suggest special treatment for 30°, 31°, and 32° Masons, when that would have included nearly everyone?" Aside from that point, there is not and there never has been the position of "Sovereign Pontiff of Universal Freemasonry" nor is there a "Confederation of Supreme Councils."

By 1896, Taxil had worked the clergy up into a paranoid state that they called for an "Anti-Masonic Congress" which was held in Trent (Austria) "to make known to everybody the immense moral and material evil done by Freemasonry to the Church and to society, and to seek a remedy by way of a permanent, international organization against the craft." Many in attendance were expecting for Diana to be there and were not satisfied with Taxil's excuses.

Because of the immense pressure, Taxil called a conference at the Geographical Society in Paris on April 19, 1897. Many attended expecting more revelations against Freemasonry as well as the public debut of Diana Vaughan. Instead, those in attendance received a shock when Taxil admitted to fabricating all of it for the sole purpose of profiting from the gullibility of the Roman Catholic Church and embarrass Rome. The crowd did not appreciate this news and he fled to save his life. Later Taxil, in an interview stated:


"The public made me what I am, the arch-liar of the period, for when I first commenced to write against the Masons my object was amusement pure and simple. The crimes laid at their door were so grotesque, so impossible, so widely exaggerated, I thought everybody would see the joke and give me credit for originating a new line of humor. But my readers wouldn't have it so; they accepted my fables as gospel truth, and the more I lied for the purpose of showing that I lied, the more convinced became they that I was a paragon of veracity."

The confession was printed, in its entirety, in the Parisian newspaper Le Frondeur, on April 25, 1897, titled: Twelve Years Under the Banner of the Church, The Prank Of Palladism. Miss Diana Vaughan-The Devil At The Freemasons. You can read the confession here: http://freemasonry.bcy.ca/texts/taxil_confessed.html

After Taxil's confession, Abbe de la Rive expressed his disgust and recanted his writings on Diana Vaughan in the April 1897 issue of Freemasonry Disclosed, a magazine devoted to the destruction of the Craft, which shows a great deal of integrity.

The modern manifestation of this fake quote originates from a book, Occult Theocracy, written by Edith Starr Miller, also known as Lady Queensborough. Although anti-Masons overlook it, the book is heavily plagiarized from Leo Taxil and other anti-Masonic publications. Miller was a New York socialite, conspiracy theorist, and a pro-Fascist who married Almeric Paget, 1st Baron Queensborough (thus the pseudonym).

Sadly, even though Taxil confessed, many anti-Masons still believe this or at least use it to justify their damnation and criticisms of Freemasonry. Some will acknowledge that Taxil confessed, but go on to say he was either coerced while some will say that the confession is a hoax itself.

Some rabid anti-Masons even go so far as attaching the "Lucifer is God" fake quote to Morals & Dogma, continued proof that the vast majority of anti-Masons have never actually read that book, but just use a few cherry-picked quotes to attack the Craft.

The fact remains there was no Dianna Vaughan, there was no Palladium Rite, there was no "Sovereign Pontiff of Universal Freemasonry", there was no "Confederated Supreme Councils of the world", or there was no Satanic rituals or beliefs of Pike. Sadly, even with all of this laid out, rabid anti-Masons will continue to quote this hoax.

2. King, E. (n.d.). Leo Taxil: The tale of the Pope and the Pornographer. Retrieved from MasonicInfo: http://www.masonicinfo.com/taxil.htm

3. Morris, B. (n.d.). Albert Pike and Lucifer: The Lie That Will Not Die. Retrieved from Masonic World: http://www.masonicworld.com/education/articles/Albert-Pike-And-Lucifer-The-Lie-That-Will-Not-Die.htm

5. The Confession of Léo Taxil. (n.d.). Retrieved from Grand Lodge of BC&Yukon: http://freemasonry.bcy.ca/texts/taxil_confessed.html