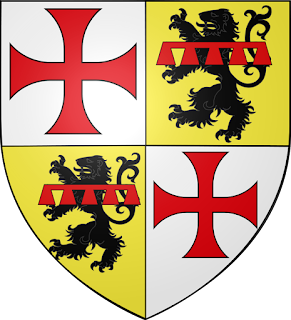 Guillaume de Beaujeu was the twenty-first Grand Master of the Poor Knights of Christ and the Temple of Solomon who served for 18-years and was known for his aim for preserving Christian lands, negotiating peace, for fighting valiantly in the defense of the city of Acre where he died, and for being the last Grand Master to preside over the order in the Holy Land.

The exact date of birth for Guillaume (William) de Beaujeu is a mystery; some say it was as early 1215 AD, but this seems early as he is the son of Guichard de Beaujeu, seigneur de Montpensier, who was born around 1200 AD and Catherine d'Auvergne who was born around 1210 AD. It is likely he was born between 1225 AD and 1230 AD. This family was pretty important and had familial ties to  King Louis IX of France and Charles of Anjou: Count of Provence and Forcalquier, Count of Anjou and Maine, and also the King of Sicily and Prince of Achaea.

It is said that he became a Templar around his 20th birthday. Beaujeu became Preceptor of the Province of Tripoli in 1271, Preceptor of the Province of Pouilles in 1272, and then was elected Grand Master May 13, 1273. Beaujeu was in Europe when he was elected Grand Master visiting the Preceptories. He wouldn't arrive in Acre until September 1275. During his trip to the Occident, Pope Gregory X convened the Council of Lyons in an attempt to organize a new Crusade, but the idea died when Pope Gregory did.

Jerusalem had been lost to the Frankish Kingdoms and Beaujeu was determined to preserve what property remained in Christian possession. He also had to fight to keep Templar property, even from other Christians because in 1279 Hugh III of Cyprus confiscated Templar properties on the island of Cyprus

Beaujeu entered into an agreement with the Egyptian Sultan called the "Truce of Tortosa." The peace didn't last long, particularly after some recently arrived Christians killed some Egyptian merchants and the Sultanate had changed hands. The new Sultan sends roughly 200,000 men to take the city. The defense is left to the Knights Templar, Knights Hospitalliers, and the Teutonic Knights.

On May 16, 1291, the Saracen Sappers create a breach in the wall of Acre. On May 18, 1291, the Egyptians launches a massive attack. Beaujeu led the knights and stems the the flood of Egyptians. During this valiant attempt, Beaujeu was hit by "darts and arrows of the enemy" whereon legend states Beaujeu dropped his sword and began to walk away. His fellow knights called after him and he responded with "I am not running away, I am dead!” raising his arm to show his mortal wound after which he collapsed and died. After a few more days of defense, the Muslims finally captured Acre and ended the Crusader occupation of the Holy Land. Guillaume de Beaujeu was succeeded by Thibaud Gaudin.

2. Gourdin, T. S. (1855). Historical Sketch of the Order of Knights Templar: An Address Delivered Before the South-Carolina Encampment. Walker & Evans.

3. Rowe, D. M. (2014, July). A Chronological View of the Crusades. Retrieved from Grand Encampment of Knights Templar of the USA: http://www.knightstemplar.org/KnightTemplar/articles/crusades.htm