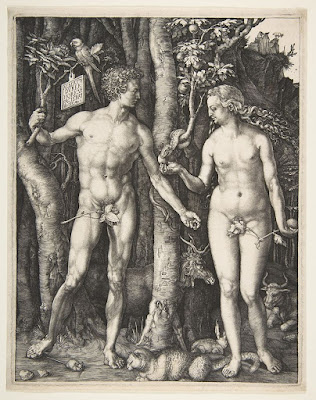 Today is Christmas Eve and the Feast Day of Adam and Eve, who were the first man and woman that lived in the Garden of Eden before being expelled after being tricked into eating the forbidden fruit from the tree of knowledge of good and evil.

For several centuries, this Feast Day was celebrated with a drama called Paradise Play that retold the story of mankind from the creation of Adam and Eve to the Birth of Jesus Christ. It is very appropriate to celebrate Adam and Eve on the day before Christmas as it brings Advent into a full circle; Adam and Eve condemned mankind with Original Sin and the promise of salvation of mankind marked by Christ's birth and eventual sacrifice on Calvary.

Christmas Eve came about, as the start of the commemorations of the birth of Jesus the Nazarene, due in part to the Christian liturgical day starting as sunset, a practice inherited from Jewish traditions generally and specifically from the Book of Genesis where it’s written: "And there was evening, and there was morning – the first day."

The nativity of Jesus or the birth of Jesus is described in the gospels of Luke and Matthew. The Christmas Story starts around taxation because not even the Savior was exempt from government taxation. During the reign of Caesar Augustus, a degree was issued to hold a census of the entire Roman Empire. In the Roman-controlled Judah, there was a man named Joseph who was pledged to be married to a woman named Mary. While still a virgin, Mary was impregnated by the Holy Spirit. Joseph being an honorable man did want to expose her to public disgrace and was informed by the archangel Gabriel, the messenger of God, that the baby would be named Jesus because he would save the people from the world. Joseph and Mary traveled to the town of David as Joseph belonged to the house and line of David and the census required one to be registered in their hometown. While in Bethlehem, Mary went into labor and gave birth to Jesus Christ. Because no rooms were available, they had to stay in a manger, today we would call it a stable.

The three Magi were visited by an angel who declared the Messiah had been born and these three traveled to Bethlehem, following a star in the sky said to rest over where Jesus was born. On there, they came to King Herod and informed them of what they saw from the angels of the Lord. Herod ordered the Magi to go onto Bethlehem to find the Savior so he could worship him as well, but intended to kill the infant Christ. When they found the baby Jesus, they praised his glory and bestowed the gifts of gold, frankincense, and myrrh. God intervened and through his angels gave warning to both the Magi and the Holy Family which allowed them to escape into Egypt until the death of Herod.

To end this, I’d like to quote James Allan Francis and say “Nineteen wide centuries have come and gone and today He is the centerpiece of the human race and the leader of the column of progress. I am far within the mark when I say that all the armies that ever marched, and all the navies that ever were built, and all the parliaments that ever sat, all the kings that ever reigned, put together have not affected the life of man upon this earth as powerfully as has that One Solitary Life.”
Posted by Barry at 8:06:00 AM