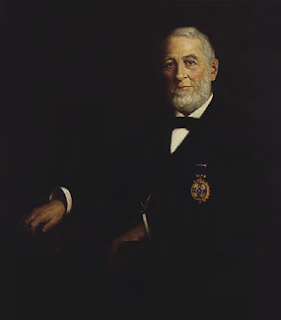 There are a number of famous Masons that one can read about: William Preston who contributed greatly to Masonic ritual and research, John Theophilus Desaguliers who is considered the Father of modern Speculative Freemasonry, Thomas Smith-Webb who is referred to as the Father of the American Rite, and Albert Pike who revised the ritual of the Scottish Rite for the Southern Jurisdiction of the USA and later served as the Sovereign Grand Commander. Within the York Rite, we can look at such men as Jeremy Ladd-Cross who is known as the Father of the Cryptic Rite, and Ephraim A. Kirby who was the first General Grand High Priest of the General Grand Chapter of Royal Arch Masons in the US. However, not much is ever discussed about Josiah Drummond. This distinguished Brother, among other accomplishments, would serve the Craft as Grand Master of the Grand Lodge of Maine, General Grand High Priest of the General Grand Chapter of Royal Arch Masons, Sovereign Grand Commander of the Supreme Council of the Ancient & Accepted Scottish Rite of the Northern Masonic Jurisdiction, Provincial Grand Master of the Provincial Grand Lodge of the United States for the Royal Order of Scotland, and the first General Grand Master of the General Grand Council of Cryptic Masons International.

Josiah Drummond was born on August 30, 1827, in Winslow, ME. He attended Vassalboro Academy and graduated from Colby College in 1846. He practiced law in the state and was active in state politics where is served as Speaker of the Main House of Representatives, State Senator, and Attorney General for Maine. Outside of politics and law, he served as Director of Maine Central Railroad and Union Mutual Life Insurance Company. He also served as Chairman of the Board of Trustees at Colby College from 1890-1902.

He was raised to the Sublime Degree of Master Mason in Waterville Lodge No.33 on January 1, 1849, in Waterville, ME. Eleven years later, at the age of 33, he was elected as Grand Master of the Grand Lodge of Maine and served until 1862. He served as Most Excellent Grand High Priest of Royal Arch Masons of Maine in 1866 and Right Eminent Grand Commander of Knights Templar of Maine in 1878.

While he presided over the Scottish Rite, he also served as the 11th General Grand High Priest of the General Grand Chapter of Royal Arch Masons; being elected and installed in 1871 and serving to 1874.

For several years, starting in 1873, there had been an effort to create a national governing body for the Cryptic Rite, but the proverbial can kept being kicked down the road. It would not be until 1880 that the General Grand Council of Cryptic Masons would be formed and Josiah Drummond would serve as the first Most Puissant General Grand Master. Many place the success of the 1880 convention on Josiah as the previous conventions had resulted in no significant end.

On October 25, 1902, in Portland, ME, at the age of 75, this truly distinguished Mason dropped forever the working tools of life. He has left an indelible mark upon American Freemasonry. To remember such a Mason, the Grand Lodge of Maine established the Josiah Hayden Drummond Distinguished Service Medal in 1939 an award for those "whose outstanding proficiency in the knowledge of Freemasonry and distinguished service in the successful application of that knowledge for the advancement of the welfare of the Craft shall have rendered them worthy of such recognition and honor."

14. Woodland, W. N. (n.d.). Some Ordo, Some Chao. Retrieved from Boston Lafayette Lodge of Perfection: https://www.scottishriteboston.net/en/page.php?id=160#.XZvwwEZKhPZ
Posted by Barry at 7:00:00 AM