Well, it's been a busy few days. Saturday I flew into Minneapolis to attend the 68th Triennial Conclave of the Grand Encampment of Knights Templar of the USA.

Sunday started with Divine Services led by the Grand Prelate and the afternoon was occupied with initiating of 14 new Knights by Trinity Chapel No.2 of the Commemorative Order of St. Thomas of Acon. That night was the Grand Master's Reception after which many of us went to the Hospitality Suite hosted by Jack Harper and the Grand Commandery of Texas.

The afternoon session started with the Grand Master's allocation. After its approval, we moved into the Resolutions (and there were 28 of them). Here is a brief synopsis of them:

Resolution 2021-01: Amends Section 18 (Educational Foundation of the Grand Encampment) to allow for more people to be eligible for the scholarship - PASSED

Resolution 2021-08: Amends Section 259 allowing for Grand Commanders to set the dates for the wearing of the summer uniform - PASSED as AMENDED which struck out the final sentence of the resolution

Resolution 2021-09: Amends Section 66 (Short Form Opening) clarifying the use of the short form opening with a quorum of less than 9 knights - PASSED

Resolution 2021-10: Amends Section 235 (Retention of Rank) clarifying the retention of rank as long as the Sir Knight maintains membership in a Commandery under the Grand Encampment - PASSED

Resolution 2021-15: Amends Section 204 (Trial of Offenses Post Adjudication by a Predicate Body) to clarify the language about a Commandery's right to being changes against a Sir Knight regardless of actions of predicate bodies (Lodge, Chapter, etc.) - PASSED

Monday night, the dais officers and wives of the Grand Commandery of Idaho and our Jr. Past Grand Commander went to the Lyon's Pub in Minneapolis to have a "Family Dinner". The food and fellowship was excellent.

Tuesday morning's session started with the Committee on Charters and Dispensation. Sadly, the charter of the Grand Commandery of Croatia has been suspended for failing to file annual returns with the Grand Encampment. However, there is good news, we chartered Commanderies in Venezuela, Peru, Paraguay, Honduras, Lebanon, Ecuador, and Costa Rica.

After charters and dispensations, we returned to the remaining resolutions:

Resolution 2021-18: Adds a subsection to Section 176 for allowing the formation of Auxillary Units similarly seen with the Shriners - PASSED as AMENDED to allow flexibility for reporting to Grand Commander

Resolution 2021-19: Amends 237(b) subsections a & c to amend qualifications of eligibility for Knight Templar Cross of Honor - PASSED

Resolution 2021-21: Replaces Section 178 for inclusion of an Attestation of Faith was AMENDED which struck the overly dogmatic language and used the words from the Order of Malta ritual that is more inclusive of all Christian denominations (see pic for change) - FAILED

The Grand Encampment then recessed so that the Knights Templar Eye Foundation Corporate meeting could be held where the necessary business was conducted and the Trustees elected, then it was back to the resolutions:

Resolution 2021-22: Adds Section 99(a) for Recognition by Grand Encampment - FAILED for failing to achieve 2/3 vote.

Resolution 2021-24: Amends Section 202 (forfeiture of membership or reinstatement for loss of predicated membership in the lodge, chapter, or council) to clarify the language and processes - PASSED

Resolution 2021-25: Amends Section 82 (Exceptions to resident requirements for members of the uniformed services) to make changes and updates to the organizations listed in this section - PASSED as AMENDED with some housekeeping changes.

Resolution 2021-27: Amends Section 114 (Payment of mileage and per diem to officers and committee members) to include trustees - PASSED

We then held elections for the officers of the 69th Triennium:

Congratulations to Jeff Nelson on his term as Most Eminent Grand Master for the 68th Triennium. You did a masteful job guiding the Grand Encampment over the last 3-years and with presiding over this meeting.

There being no further business, the Grand Encampment adjourned for the day and the Sir Knights and their ladies met for the Grand Master's Banquet. Afterward many of us met in the Texas Hospitality Suite to celebrate the election and impending installation of Sir Knight Jack Harper as Grand Captain General. Even though I am not a Texan, I am a friend of Jack's and extremely proud of him and all that he does.

With Wednesday morning came the installation of officers. Congratulations to all of the new officers, but particularly to Sir Knight Jeremy Vaughn of Idaho who was installed as the Northwest Department Commander. I am excited to travel throughout the Northwest with my best friend as my Commandery counterpart. 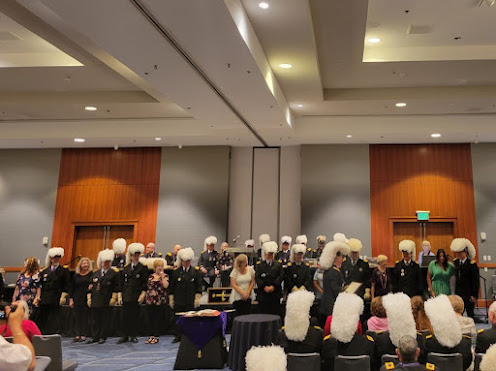 Now, I sit at the airport awaiting my flight back home. It's been fun, but it is time to get home. Also, this is also my 700th article on this site!