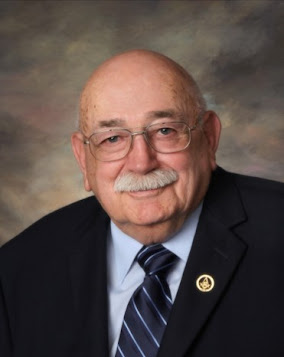 It is with great regret that I announce the death of Most Worshipful Brother Kent R. McCandless. Bro. Kent was born in 1939 in Idaho Falls, ID. He joined the US Navy when he was 17 and was stationed in Kamisaya, Japan, and ended his service in October 1960 as a Petty Officer Second Class. He worked for a bank for several years where he met his wife Rosalyn whom he married in 1966. In 1977, he joined the Bonneville County Sheriff's Department where he served until December 31, 1999.

Kent was initiated, passed, and raised in Eagle Rock Lodge No.19 in the Spring of 1999. He served as its Worshipful Master in 2007 and 2008. He would serve as District Deputy Grand Master before being appointed as Junior Grand Steward and would serve as the Most Worshipful Grand Master of Masons in Idaho for 2018-2019. He was very active in several concordant bodies: he was a member of Shriners International for a period of time, a 33° in the Ancient & Accepted Scottish Rite, Southern Jurisdiction, and a Philosophus (IV°) in Wyoming College of the Societas Rosicruciana in Civitatibus Foederatis. He was also very active in the York Rite of Freemasonry: He presided over all three York Rite bodies in Idaho Falls and served as Right Eminent Grand Commander of the Grand Commandery of Knights Templar of Idaho in 2017-2018, Most Excellent Grand High Priest of the Grand Chapter of Royal Arch Masons of Idaho in 2020-2021, and was elected as an Honorary Past Grand Master of the Grand Council of Cryptic Masons of Idaho in 2021. He was also a recipient of both the Knight Templar Cross of Honor and Knight Commander of the Temple. He is also a Past President of the Order of High Priesthood of Idaho, Past Thrice Illustrious Master of the Order of the Silver Trowel of Idaho, Past Preceptor of the Idaho Chapter of the Sovereign Order of Knights Preceptor, member of the Order of the Sword of Bunker Hill, Past Sovereign Master of Fidelity Council No.277 of the Allied Masonic Degrees, Emeritus Member of Redemption Tabernacle No.XL of the Holy Royal Arch Knights Templar Priest, Past Prior of Idaho Priory No.13 of the Knights of the York Cross of Honor and recipient of the Knights of the York Grand Cross of Honor (Three Quadrants: Lodge, Chapter, and Commandery), Past Sovereign of St. Charles Conclave of the Red Cross of Constantine, and Past Pre-Eminent Governor of Tri-Valley College No.178 of the York Rite Sovereign College of North America

I had the pleasure of working with him in several Masonic organizations. Kent was a model Freemason and he will be greatly missed. Godspeed Brother.