Officers of a Tabernacle of the HRAKTP 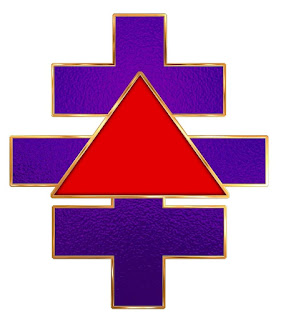 The presiding officer of the Tabernacle is the Very Eminent Preceptor akin to the Worshipful Master of a Blue Lodge or an Eminent Commander of a Commandery of Knights Templar. The word 'preceptor' originates from the Latin word "praeceptor" meaning "teacher or instructor." Whether in its historical use or in the modern sense of the word, a Preceptor is an expert or specialist. Today, it is used to denote a medical or legal specialist. Historically, a Preceptor was in charge or in the chain of command of Christian military orders such as the Knights Templar, Knights Hospitaller, and Teutonic Knights.

Next is the Deputy Preceptor who is the second-in-command of the Tabernacle and who corresponds to the Senior Warden in the Blue Lodge although, in the Tabernacle, the Deputy is stationed on the right of the Preceptor in the East rather than in the West. In the absence of the Very Eminent Preceptor, the Deputy presides. The title of Deputy comes from the Latin "deputare" meaning to "allot or to destine" which has come to indicate a subordinate officer or one given the full power of an officer without holding the office.

Like most Masonic bodies, there is a Treasurer who is the chief financial officer of the Tabernacle. The Statutes of the Grand College of the USA state that "the offices of the Treasurer and Registrar may be combined."

Corresponding to the Secretary of a Blue Lodge, the Registrar is the record-keeper of the Tabernacle. The term 'registrar' is etymologically rooted in the Latin word "registrarius" meaning "one who keeps a record." Traditionally, a registrar is an officer who keeps records for educational institutions, banks, trust companies, or hospitals. The Registrar in the Tabernacle sends the official invitation to candidates, mails the summons for each Ingathering to all of the members, sends in the Annual Return to the Grand College, and records the actions of the Tabernacle at each Ingathering.

The First Pillar through the Seventh Pillar are appointed officers of the Tabernacle. They assist the Very Eminent Preceptor in opening the Tabernacle as well as having a key role in the reception of candidates. "Pillar" comes from the Latin "pila" meaning "pillar or stone barrier." Architecturally, pillars differ from columns in that pillars were not "subordinated to the rules of classic architecture." Figuratively, the word "pillar" can be used to denote an integral or upstanding member of a group or society. With this, we see that it is appropriate for these officers to be called Pillars as they are integral to the Tabernacle, support the Tabernacle and the Preceptor, and stand as a barrier to those unworthy of reception into our order.

The last two appointed officers are the Inner Guard and the Outer Guard who correspond to the Junior Deacon and Tyler of the Blue Lodge. As their names indicate, the Inner Guard sits within the door to the Tabernacle and the Outer Guard is without the door. The word "guard" derives from "garder," an Old French word meaning "to keep, maintain, preserve, or protect." Like the Junior Deacon, the Inner Guard attends to alarms at the door, but also has duties similar to the Senior Deacon as he conducts the candidates through the ritual of the order. The Outer Guard's duties are simply like those of the Tyler, ensuring the security of the Tabernacle.