Of all the flowers, the rose is a singular example of a natural form that has been included in the symbolism of many cultures, spiritual traditions and folklore throughout the centuries.
- Linda Iles 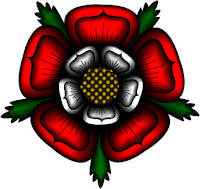 Throughout its history, the rose has caught the imagination of the masses. This flower has been used as a symbol in a variety of forms, from one of romance to duality (celestial perfection and Earthly passion), to wisdom, and many more, by various groups, cultures, and individuals. As it is such a complex symbol let's take a look at some of the uses and by whom.

According to Merriam-Webster, a rose is "of usually prickly shrubs with pinnate leaves and showy flowers having five petals in the wild state". From Greek mythology:


The rose was created by Chloris, the Goddess of flowers. One day she found the lifeless body of a nymph in the woods and turned her into a flower. Chloris called upon Aphrodite who gave the flower beauty and Dionysus who added nectar to give it a sweet fragrance. Zephyrus, God of the West Wind, blew the clouds away so Apollo could shine and make the flower bloom.

As the rose, from culture to culture, may vary in symbolic meaning, so too within a single culture can the color of the rose change the interpretation and representation. Some of the most common rose colors are (with common meanings):

The rose can also emblematically represent secrecy, and we see the phrase "sub rosa" which is Latin for "under the rose" used to denote secrecy or confidentiality. When assembled, if it was to be understood that anything said in the meeting was to never be repeated elsewhere, the Romans would hang roses from, or paint them on, the ceiling above the table - "sub rosa". The use of the rose as a symbol for secrecy goes back to ancient Greek and Egyptian mythology, where the rose was also a symbol for the god Horus (son of Isis). Although Horus was the sky god, represented by a man with a falcon for the head, he was sometimes represented as a child. In Egyptian artwork, the child was often represented by a naked child with his finger on his mouth as if sucking on it, to denote youth, but the Greeks misunderstood this gesture to mean "secrecy". The Greek's translated the name of Horus to which they now have the Harpocrates, the god of silence. It was adapted in Greek lore that Aphrodite gave her son, Eros (or Cupid), a rose. He in turn gave this rose to Harpocrates, god of silence, as a bribe to make sure that the indiscretions of the gods and goddesses were kept "under wraps", concealed. Harpocrates was often represented as a chubby infant with a finger to his mouth.

A rose can also symbolize the rising Sun in the East, resurrection, or rejuvenation. To the Egyptians, Horus represented, among many things, the rising Sun bringing the new day. For Christians, this symbolic representation can be seen in Jesus Christ, the Blessed Redeemer, the Morning Star.

Keeping with Christianity, the rose is associated with the Virgin Mary as well as the martyrdom, passion/charity, and resurrection of Christ. The red rose, specifically, is symbolic of the blood of Jesus as it is said that a rose bush grew from the site of Christ's death. With the rose's beauty, it is also contrasted its thorns, we're also reminded of the Crown of Thorns the Savior wore, and thus we see the rose become the ultimate symbol of Christ's sacrifice. With a 5-petaled rose, we also see the symbolism of the passions of the Blessed Redeemer and the wounds he suffered upon the cross.

In Islam, the rose signifies the blood of the Islamic Prophet Mohammed and his two sons. A white rose appears as a symbol of purity and martyrdom, of the straight path and the paradise that awaits those martyred in the cause of God in Islamic culture. The red rose was also considered a symbol of martyrdom, but particularly signified a violent struggle more broadly than the white rose.

In Masonry, there is a great deal of use of the rose in our ceremonies and rituals as it is a very appealing symbol. In Albert Pike's "Morals & Dogma":

The rose was anciently sacred to Aurora and the Sun. It is a symbol of Dawn, of the resurrection of Light and the renewal of life, and therefore of the dawn of the first day, and more particularly of the resurrection: and the Cross and Rose together are therefore hieroglyphically to be read, the Dawn of Eternal Life which all Nations have hoped for by the advent of a Redeemer.

In the Scottish Rite, the rose has special connections to some of the degrees. In the 4°, one of the virtues espoused is silence whereby we are reminded of the white rose. In the 18° which is referred to as the Knight Rose Croix (Rose Cross or Red Cross) where the cross used is one that all 4 limbs are the same size to denote balance.


In Masonry, the rose has taken on the meaning of immortality. Surely the idea of immortality is as old as rational man. The Neanderthals buried their dead with their possessions, possibly believing that the deceased would still have need of them. The most ancient mythologies speak of men made gods, to dwell forever in the heavens. Immortality is the quintessential hope of all mankind. For many it is the very source of virtue, for others only an absurd superstition; therefore, Masonry teaches only the hope of Immortality, but still the literature of the Craft abounds with the expression of the soul's immortality and time has forged it into a creed, if not a doctrine.


One of the most used symbols in alchemical art was the rose. The rose is a symbol of completion, attainment, and perfection. It can also be an emblem of regeneration. The original symbol of the Rosicrucian fraternity was a hieroglyphic rose crucified upon a cross. The cross was often raised on a three step pedestal, representative of the crucifixion. In the 10th degree there is a rose above three arches, this may be symbolizing a form of the crucifixion

As we've seen the rose has reached throughout the realms of time to touch the global culture.

What does the rose mean to you?

3. Hutchens, R. (1988). A Bridge to Light. The Supreme Council of the Ancient & Accepted Scottish Rite of Freemasonry.

13. Symbolism and Colors of the Rose. (n.d.). Retrieved from http://www.astrostar.com/articles/Roses_ColorSymbolism.htm