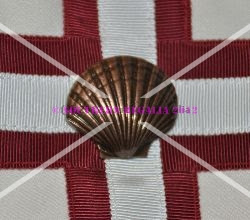 Officially known as the Commemorative Order of Saint Thomas of Acon, this order exists to reaffirm a Knights Templar’s vows and to raise funds for the maintenance of the Canterbury Cathedral. Membership in this Order is by invitation-only with the prerequisite that they also be a member of a recognized Commandery of Knights Templar. There is also a membership restriction for each Chapel, but they are encouraged to keep their membership below 50-knights.

The basic organizational unit of the Order is called a Chapel and the followers are as follows:

History of the Order

Here is an essay on the history:

That we have a revival of this very English Order of Chivalry is due to the untiring efforts of our first Grand Master, Sir John of Dorking (the late John Walker who was Secretary General of the S.R.I.A. for many years). John spent more than twenty years searching the archives of the Guildhall Library for information about the Order of St. Thomas of Acon, intending initially to write its history. Happily, he discovered the report of the Installation of the Master in 1510, an account so unusual and so typically English, that he felt compelled to revive the Order, albeit Masonically, rather than attempt to compete with the many histories of these Islands - some, alas, more lurid than accurate- which vie for public attention.

In former times, few could read or write so that memories were better developed than ours. Pythagoras forbade all writing, considering it "the destroyer of all memory"; fortunately most people were more tolerant. It was not necessary to record what was to be spoken, nor to give more than headings of the order of events; such clues as have survived require imaginative interpretation. Good stories, on the other hand,(such as those of Becket, father and son), were written down for use as homilies by priests.

The Third Crusade begin in 1189 A.D., and on the 8th. June 1191 King Richard I (Richard Coeur de Lion) arrived with his forces, before the seaport of Acre, and captured the city in 5 weeks. Amongst the English force was one, William, the Chaplain to the Dean of St. Pauls, who when he saw the corpses of the Christians about the walls of Acre, had compassion on them. With the aid of a few helpers he buried a large number of the dead, and tended the wounded. Seeing that his actions were being appreciated, William formed an Order for the express purpose of burying Christian Knights who fell in battle in the Holy Land. To this first purpose he added a second, the raising of monies to redeem ransomed captives captured by the Saracens. The Order being formed at Acre its name was incorporated in the title (the Anglicized version of Acre being Acon). The Order was so successful that William was able to build a church and churchyard which he dedicated to St. Thomas `a Becket, thus the Order became entitled the Commemorative Order of St. Thomas of Acon. Through disease and death of the other knights fighting in the Holy Land, this Order of English monks was pressed into service as replacements, and became an Order of military monks, (it was also at this time circa 1279 that the Prior lost his pre-eminent position, this being accorded to the Master), fighting alongside the Knights of the Temple, the Knights of the Hospital of St. John the Almsgiver, the Knights of the Hospital of Lazarus and the Teutonic Knights of the Hospital of St. Mary. King Richard I rewarded their valour by according them the status of an Order of Chivalry. Of all the five noble Orders of knights in the Holy Land at this time, only this Order had a purely English foundation - a fact of which we should be justly proud.

In England the Order acquired the property of the Becket family in Cheapside where they built a Chapel and a headquarters. Following the battle of Acre, the Order of St. Thomas of Acon merged temporarily with the Order of the Temple. When the knights were subsequently driven out of Cyprus, the Chapel of the Order of St. Thomas was the only church on the island permitted to ring its bells. Remains of this church can still be visited.

Old records are sparse, the last admission into the Order being recorded on the 2nd. February 1367, but that the order continued is not in doubt as the records of the Installation of a Master in 1510 mentioned above demonstrate and it was listed as one of the Orders dissolved by Henry VIII.

At the dissolution of the monasteries in 1538, he offered the Chapel of the Order for sale, and, in memory of St. Thomas (Thomas `a Becket being canonized barely two years after his death during the Lentern period in 1173) , and in view of the association of his father, Gilbert, with their trade, the Worshipful Company of Mercers purchased it. The Chapel in Cheapside was destroyed in the Great Fire of London and the present Mercers Hall and Chapel were built on the site. This is a matter of historical record, lengthy articles have been published in the "Historical Review" ,which is available in most public libraries and in several books. All that remains today to remind us of that building is the recumbent statue of Christ which lies at the entrance of the new Mercers' Chapel.

Additionally, the Church of St. Thomas, in the City of London, was built in honour of St. Thomas `a Becket, and the Mayor, on the day of his Installation, always attended Mass in that church, before proceeding to St. Pauls.

Other papers on St. Thomas `a Becket:

Order of St. Thomas of Acon

The Order of St. Thomas of Acre