The Banners of Royal Arch Masonry

While I was writing the article "Symbols of Royal Arch Masonry - Part 2", I started to wonder about the sigils (the symbol or seal) which adorned each of the four banners used in Royal Arch Masonry. I wondered as to why we used the Tribes we did on our Banners, but the answer to that was easy enough to find. I wasn't done though, I wondered as to what the significance of these four symbols was and what, if any, connection they had with ancient cultures and mythologies.

First off, I must note a considerable difference between American Royal Arch Masonry and English Royal Arch Masonry. In the American system we use just four banners while the English use twelve banners to represent the 12 Tribes of Israel. Why only use four banners instead of all twelve?  A likely answer comes to us from the Encyclopedia of Freemasonry, wherein it states:

But our American Royal Arch Masons, as we have seen, use only four banners, being those attributed by the Talmudists to the four principal Tribes Judah, Ephraim, Reuben, and Dan. The devices on these banners are respectively a lion, an ox, a man, and an eagle.

It is in the Book of Numbers that we read about these principle Tribes of Israel. In Chapter 2, we find a description of the encampment which surrounded the Tabernacle that Moses erected by Divine command. In the following verses describes the four principle Tribes:

And on the east side toward the rising of the sun shall they of the standard of the camp of Judah pitch throughout their armies
- Numbers 2:3

On the south side shall be the standard of the camp of Reuben according to their armies
- Numbers 2:10

On the west side shall be the standard of the camp of Ephraim according to their armies
- Numbers 2:18

The standard of the camp of Dan shall be on the north side by their armies
- Numbers 2:25

I find this a reasonable answer as to why the American Royal Arch uses just these four banners and tribes. One must also see that the use of four comes to us as reminder of the veils to the Tabernacle. Now we're faced with the question, "Why do we use the sigils or devices on these specific banners?" In second verse of the Second Chapter of the Book of Numbers, we read that "Every man of the children of Israel shall pitch by his own standard, with the ensign of their father's house." As to what the color and device of each banner was cannot be found in the Holy Writings, so we must, as we see above rely on the inventive genius of the Talmudists.  Again from the Encyclopedia of Freemasonry, we read:

We must, then, depend on the Talmudic writers solely for the disposition and arrangement of the colors and devices of these banners. From their works we learn that the color of the banner of Judah was white; that of Ephraim, scarlet; that of Reuben, purple; and that of Dan, blue; and that the devices of the same Tribes were respectively the lion, the ox, the man, and the eagle.

As to what influenced the application of these devices one needs only look to the Book of Ezekiel, wherein we read:

Leaving the Old Testament and going to the last book of the Bible, in the Book of Revelations we read:

It's likely that this last verse was influenced by Ezekiel's vision. Ezekiel and the use of the four faces in his vision may have been influenced by his environment as he wrote his work during the Jewish captivity in Babylon. These Four Living Creatures seen in Ezekiel's vision are referred to as "tetramorphs" and are said to be the Four Cherub who surround God on His Throne and represent the Tetragrammaton (the four Hebrew letter theonym), and in the New Testament are said to represent the Four Evangelists who scribed the four aspects of Christ. The Four Living Creatures associated with Ezekiel's vision, then applied to the Four Evangelists and the four principle Tribes of Israel are also associated with the four fixed signs of the Zodiac where the Man represents Aquarius, the Lion represents Leo, the Ox or Bull represents Taurus, and the Eagle is associated with Scorpio.

Tetramorphs are defined as "a symbolic arrangement of four differing elements, or the combination of four disparate elements in one unit. The term is derived from the Greek tetra, meaning four, and morph, shape." Tetramorphs appear in many ancient and modern cultures, and the most common theme that binds them all together is that they usually stand as guardians or protectors. Some cultures may use the same or similar animals and some use completely different animals, but the theme of guardianship remains the same. 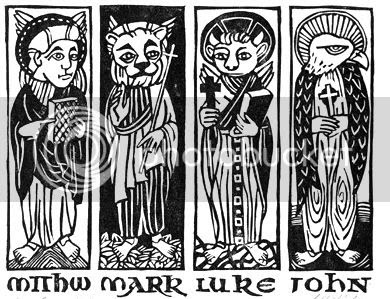 As I stated above, the Four Evangelists have been symbolically represented by the Four Living Creatures seen in Ezekiel and Revelations. In Christian art these tetramorphs often surround Christ and each Evangelist is represented by one of the Four Living Creatures. Matthew is represented as a Man as his Gospel revolves around the human life of Christ. Mark is said to be represented as a Lion because his Gospel surrounds the royalty of Christ as the lion is the king of the beasts so too is Christ the King of Kings. The Bull or Ox, an ancient symbol of sacrifice, is said to represent Luke due to the fact that this Gospel shows us the atonement and great sacrifice of Jesus Christ. Finally, John is said to be represented by the Eagle as his Gospel deals with Christ and the Word of God as the Eagle was to the ancients a divine messenger and is the Master of the Skies.

There are many examples of the use of tetramorphs in ancient cultures such as Egypt, Assyria, Sumer, Mesopotamia, Greek, and Babylon. The first example that came to mind is the "lamassu". 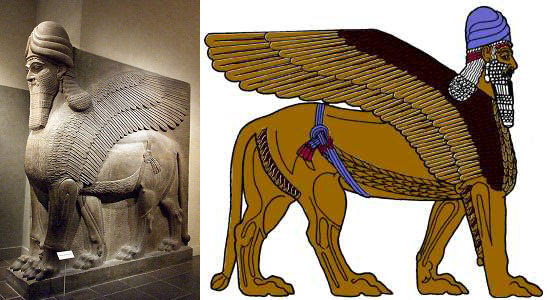 The lamassu is a protective or guardian deity which was often depicted with a bull or lion's body, wings, and a human head. The lamassu could often be found near the entrances to households, palaces, temples, or cities. To protect houses and smaller dwellings, the lamassu was engraved upon tablets and then buried at the threshold of the door.  For palaces, temples, and city entrances there could be found large statues of the lamassu, often in pairs, each standing as a sentinel on either side of the gate or doorway. For city entrances, location permitting, there would be four pairs of lamassu where each pair would face in a cardinal direction.

The lamassu is also linked to the sphinx which likewise unites various creatures together into a single entity. The most famous is the Great Sphinx of Giza which is composed of a lion's body with a human head. This sphinx is said to be the guardian over the tomb of Khafre. Staying with the ancient Egyptians, I want to also point out that when one died, they went through the process of mummification (the process of preserving the body after death) and certain organs were harvested and stored in four jars referred to as Canopic jars. Each jar contained a specific organ, which were the stomach, lungs, liver, and intestines. Jars in the early Egyptian dynasties were plain, but in later dynasties the stoppers or lids to these jars were ornamented with the heads of the Four Sons of Horus who were charged to be guardians of the organs as well as the gods of the cardinal directions. There are some differences between the Christian tetramorphs and these guardians as the Four Sons of Horus were composed of the following gods:

Duamutef, a jackal-headed god who protected the stomach and represented the East

Qebehsenuef, a falcon-headed god, protected the intestines and represented the West 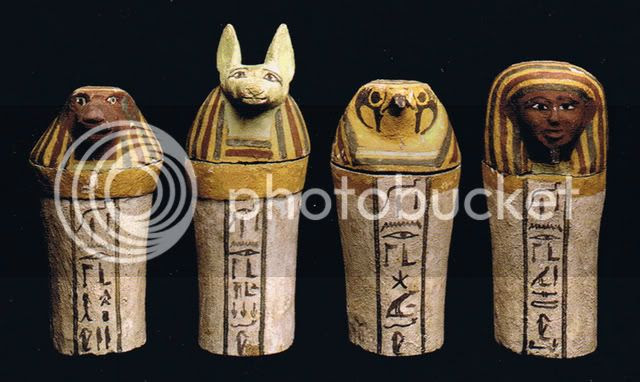 We see the difference and that only two of the heads correspond to the Christian tetramorphs, that of the human and the eagle/falcon. It should be noted that Ezekiel saw in his vision that these creatures came forth from a cloud and the Four Sons of Horus would never have been associated with a cloud or storm due to the fact that Set, the nemesis of Horus, was the god of storms and chaos. There are also many examples of tetramorphs in various mythologies like the manticore or harpies.

In closing, it's reasonable to assume that the sigils of these four Royal Arch banners were, depicted as they are, influenced by Ezekiel's vision of the four cherubim. Such use of tetramorphs is not unique to the Judeo-Christian traditions, but has been long seen in the ancient world. Tetramorphs are commonly used as divine guardians and we see this commonality with the Masters of the Veils and Royal Arch Captain who bear and protect the banners, and who represent the attendants who protected the four veils of the Tabernacle. 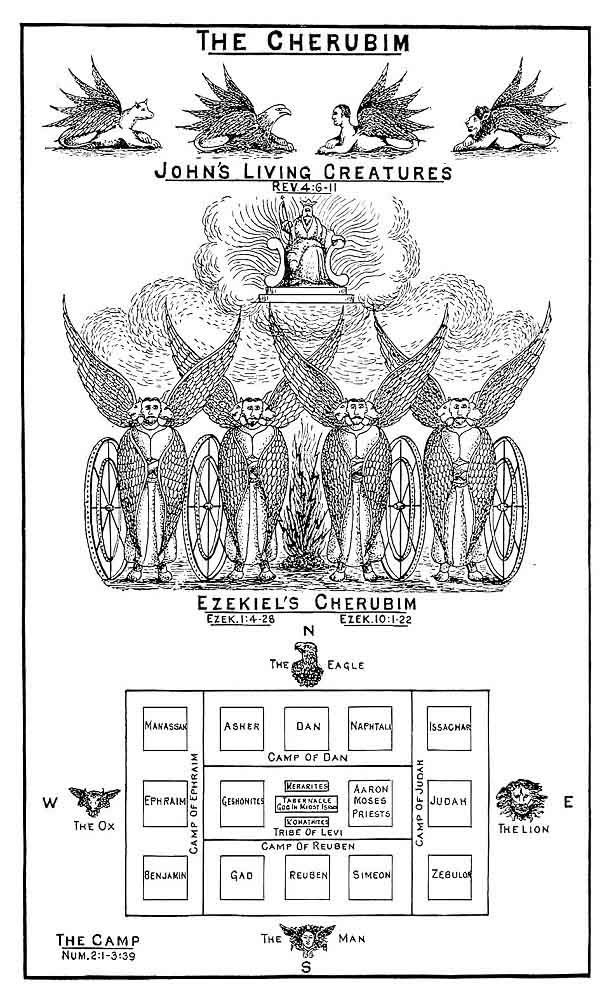 5. Horvat, M. T. (n.d.). The Man, The Ox, The Lion & The Eagle. Retrieved from Tradition in Action: http://www.traditioninaction.org/religious/f005rp.htm