The Scottish Rite of Freemasonry

Today marks my One Year Anniversary in the Scottish Rite of Freemasonry.  I have enjoyed my year, but I have taken it slowly as I am more involved with the York Rite. For those unfamiliar here is an Introduction and History of the Scottish Rite. 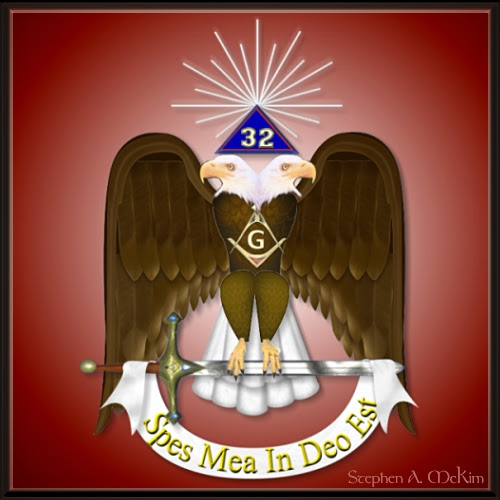 The Ancient & Accepted Scottish Rite of Freemason, or simply known as the Scottish Rite is perhaps the most known appendant body of Freemasonry, maybe second only to the Shriners. It confers a series of progressive degrees. This Rite is one of several appendant or concordant bodies in the Masonic fraternity. They confer from 4° to the 33°. These degrees build upon the ethical and moral teachings and philosophies offered in Craft Masonry, or more commonly known as the Blue Lodge, through dramatic presentations. These degrees should not be seen as superior to the first three degrees of Craft Masonry, but just a continuation of one's search for more Light in Freemasonry. These degrees are conferred by several controlling bodies: the Lodge of Perfection confers the 4° through the 14°, the Chapter of Rose Croix confers the 15° through the 18°, the Council of Kadosh confers the 19° through the 30°, and the Consistory confers the 31° and 32°. For certain members who have given meritorious service to the community and to Freemasonry, the Rite may confer the 33°.

In writing the Introductory chapter of "A History of Royal Arch Masonry", Everett Turn and Ray Denslow wrote the following:

The story of today is a history of tomorrow. When that story is written there is sufficient information to make a history. Where it is not written, then much must be supplied by our imagination. Such is the condition in which your committee found itself when they started to prepare this history.

Our Masonic ancestors, whether through indolence, or a fear of making public their secrets, failed to leave sufficient records whereby the true story of Freemasonry could ever be written.

As it is with the Royal Arch, York Rite Masonry, so it is with Scottish Rite Masonry as little is known about the origins of these "higher degrees." The earliest references to this Rite is in France. Some surmise that although it is first seen in France many think Scots fled to France in search of refuge from the violence occurring in the British Isles. From this many believe that this migration led to the use of the term "Scottish." In "Freemasons For Dummies", Christopher Hodapp states that France was "Freemasonry's Foundry Furnace" from which many different Masonic and pseudo-Masonic groups were formed, many of them occurred after the famous Oration delivered by Chevalier Andrew Michael Ramsay delivered in 1737, which connected Freemasonry to Crusading knights.

In Bordeaux, an influential Masonic center in France, was established a "Scottish Lodge" which had a set of "advanced degrees." In 1761, Masonic authorities granted a patent to Stephen Morin, a resident of Bordeaux, to spread the degrees across the Atlantic to the American colonies. In 1763, Morin was established in the West Indies.  The degree system he established was one of the 25-degrees and was known as the "Rite of Perfection."

In 1767, Henry Francken, a Dutch merchant, organized a "Lodge of Perfection" in Albany, NY. Prior to his time in the colonies, he had been to the West Indies and had been deputized by Morin.  In addition to creating this body in Albany, he transcribed four times all of his degrees into books which are referred to as the "Francken Manuscripts", from the 4th degree (Secret Master) to the 25° (Royal Secret or Knights of St. Andrews-the faithful guardians of the Sacred Treasure). The years following other deputies were appointed by Morin which organized Masonic groups and conferred these "advanced or higher degrees" along with the colonies. These groups were decentralized and independent of one another, but all agreed upon the authority they had received from Stephen Morin.

It wasn't until May 31, 1801, that a central authority was set up which was called "the Supreme Council of the Thirty-third Degree for the United States of America" in Charleston, South Carolina. This Supreme Council sought to create "Order out of Chaos" (its motto). With this creation, it added eight more degrees ending with the 33°. Today the headquarters is in Washington DC at the well-known House of the Temple.

On August 5, 1813, Emanuel De La Motta, a 33° from Savannah, Georgia, and Grand Treasurer General of the Supreme Council at Charleston, organized in New York City the Supreme Council of the Thirty-third Degree for the Northern District and Jurisdiction of the United States of America which today holds authority over the 15 States East of the Mississippi River and North of the Ohio River and the Mason-Dixon Line. La Motta arriving in NY and finding competing factions decided to side with Antoine Bideaud, who had fled from Santo Domingo after the slave revolt and established a Consistory of the 32°. From this Consistory, he established this Northern Supreme Council. The Headquarters today is in Lexington, Massachusetts.

Regardless of this newly established body, it still took some time to unify all the scattered groups and to standardize the rituals. They attempted to solve this by convincing the traveling Inspectors to give allegiance to the Supreme Councils.  Any Inspector who would yield would be given authority to confer up to the 32° which the Supreme Council hoped would make their offer more attractive.  This was fairly successful and soon the traveling and independent Inspectors disappeared.

The biggest influence on the standardization of the ritual was Albert Pike. Pike received the Scottish Rite degrees in March of 1853 from Dr. Albert G. Mackey in Charleston, SC.  He was appointed Deputy Inspector of Arkansas that same year. Along with 4 others, Pike was appointed to a committee to prepare and compile the rituals of the Scottish Rite. In 1857 Pike completed his first revision which was dubbed by Mackey as a "Magnum Opus." This revision was not accepted by the Supreme Council, but was the foothold for future revisions. In 1859, Pike was elected as the Grand Commander.  Revisions continued, but the Civil War slowed this considerably. In 1870 when the Supreme Council, and Pike, moved from Charleston to Washington DC, where work was resumed on revising the ritual.  In 1884, Pike completed his revisions of the ritual.  Pike is also known for his writings, the most famous of which is Morals & Dogma, first published in 1872.

Eventually, I will have a chance to get more involved with the Scottish Rite, but at this time my focus is on the York Rite. It is a fascinating system and I enjoy the Brethren and the rituals.

2. Morris, B. (n.d.). History of the Rite. Retrieved from The Supreme Council of the Ancient & Accepted Scottish Rite, Southern Jurisdiction: http://scottishrite.org/about/history/