The Father of the American Rite 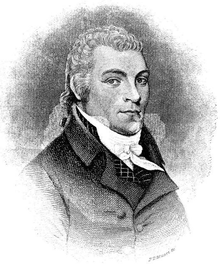 Considered by many to be the Father of the American Rite, or more commonly known as the York Rite, Thomas Smith Webb was born on October 30, 1771, in Boston, Massachusetts. He grew up as an apprentice to a printer in Boston than in New Hampshire. It was in Keene, New Hampshire, that he took the three degrees of Ancient Craft Masonry in the Rising Sun Lodge in 1790. In 1793, he moved to Albany, NY, and established a paper staining factory.

Thomas Smith Webb was the author of Freemason's Monitor or Illustrations of Masonry, which had a very significant impact on the development of the Masonic ritual, particularly the York Rite degrees and orders, in the United States. On September 14, 1797, published this book which was a compendium of William Preston's work as well as his own alterations, additions, and works. This book plays such a significant role that many Grand Lodges in America still follow it today.  It is to Webb we owe the charges of the degrees and the words regarding many an Emblem, including the Bee-Hive, Pot of Incense, Book of Constitutions, Sword and Naked Heart, All-Seeing Eve, Anchor and Ark, Forty-Seventh Problem, Hour Glass, and Scythe.

One of the biggest accomplishments and momentous occasions for Thomas Smith Webb was that he presided over the convention that was held in Boston in October of 1797, which would lead to the formation of the General Grand Chapter of Royal Arch Masons (which is the oldest national Masonic body in the US).  At the meeting that was held in Providence, Rhode Island, in January of 1799, he presented a Constitution which was adopted. Through his work, what would become the Grand Encampment of Knights of the United States of America would be established in New York City in 1816.

In 1799, he moved to Providence where he spent most of his remaining years, and here in St. John's Commandery, you can find the original draft of the Grand Encampment Constitution in his handwriting.

He died on July 6, 1819, during a trip in the Midwest in Cleveland, Ohio. A Masonic burial service was held in Cleveland and memorial services were conducted in many cities. Eventually, his body was taken to Providence and reburied in the West Burying Grounds. That cemetery was later converted to a park so the body was moved to the North Burial Ground where there was a marble monument erected by the Grand Lodge, which makes that three times.

This man was a dedicated Mason and his record of accomplishment is second to none.

3. Redmond, A. (2006). The Complete History Of The Epoch Making Thirty-First Triennial Conclave Of The Grand Encampment Knights Templar Of The U.S. With A Concise History Of Templarism From Its Inception. Kessinger Publishing, LLC.

4. Ron, B. (2001, June 16). The Rituals of American Freemasonry. Retrieved from The Masonic Trowel: http://www.themasonictrowel.com/ebooks/fm_freemasonry/Blaisdell_-_The_Rituals_of_American_Freemasonry.pdf

6. Thomas Smith Webb. (n.d.). Retrieved from Wikipedia: http://en.wikipedia.org/wiki/Thomas_Smith_Webb
Posted by Barry at 8:30:00 AM