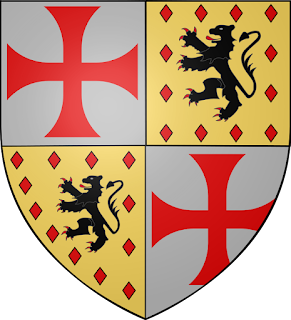 The 18th Templar Grand Master was Guillaume (or William) de Sonnac. His tenure was considered a violent one, particularly since he died after losing both of his eyes in a fight with the Mameluks, but he also is remembered for creating the most in-depth, codified records for this knighthood.

De Sonnac was born to a noble family in the Rouergue region of France. The Rouergue region exists today as the Department of Aveyron. Historically this region sat in between Auvergne, the Languedoc, the Gévaudan, and Quercy.

It isn't exactly known when he was born which is very ironic as he is remembered for being a great chronicler of Templar records Nor is it known when he joined the Templars, but prior to serving as Grand Master, he served as Preceptor of Aquitaine in France.

He arrived into the Holy Land in 1247 to find the Templar order in a diminished capacity after a series of failed battles. On October 17, 1244, the Battle of La Forbie started and which resulted in the death of more than 30,000 crusaders. It is debated as to whether the Grand Master, Armand de Périgord, died at the battle or was imprisoned where he later died.

By the end of 1247, a chapter was assembled at Pilgrim's Castle and De Sonnac was elected the order's new leader. He not only came into this role with a weakened order, but also a weakened kingdom as the Muslims had retaken Tiberias, Mount Tabor, Belvoir and Ascalon. Not wanting to completely lose the Holy Land, King Louis IX of France launched the Seventh Crusade.

In June 1249, the Crusaders and Templars captured Damietta (a town in Egypt along the Mediterranean coast). In November, the army started towards Cairo (south-southeast of Damietta), but had to go through Mansourah to defeat a large Egyptian force. The crusader army could not overcome the city as the Nile River was running high. In February 1250, a local showed the crusaders how to cross the river. Without the support of the main Crusader army, Robert, the Count of Artois and brother to King Louis IX, launched an attack on Mansourah. De Sonnac spoke against it, but ultimately joined the assault.

The Mameluks used the narrow streets against the knights who couldn't maneuver and defend themselves. De Sonnac and one other Templar were the only ones who escaped Mansourah, though De Sonnac had lost an eye. As De Sonnac escaped, the rest of Crusader army arrived and was able to drive the Mameluks back into Mansourah.

On April 6 (some sources say April 11), 1250, the Mameluks launched another assault on the besieging crusaders. The Templars fought the Mameluks, but De Sonnac had been overwhelmed, lost another eye, and then lost his life. This battle not only resulted in the defeat of the Crusaders, but marked the end of the Seventh Crusade and the capture of King Louis IX. De Sonnac was succeeded by Renaud de Vichiers.