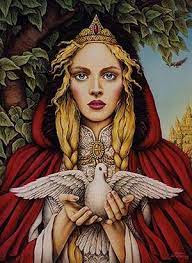 Today is the Feast Day of Esclarmonde de Foix, a Cathar priestess from the 12th and 13th centuries. Before I had joined the Apostolic Johannite Church I had never heard of her. I found in my research that there were several women of noble birth named "Esclarmonde" which made it difficult to trace her history. She is remembered for her fervent support of the Cathar faith, her presence at the Council at Pamiers 1207, and her part in the renovations to the fort of Montségur which would help shield her people during the Albigensian Crusade

It is believed that she was born after 1151 to a noble family in what is now southern France; some give a date range of ~1151 to 1165 and I found several sources that dated her birth to 1154 or 1155. She was the daughter of Roger Bernard I, Count of Foix (a vassal of the Count of Toulouse), and Cécile Trencavel, daughter of Raymond I Trencavel, the Viscount of Agde, Béziers, Albi, Carcassonne, and Razès. Her name, Esclarmonde, means "clarity or light of the world". Some theorize that her name comes from the Visigothic words "Is Klar Mun".

Growing up in Occitania afforded her an education in language, poetry, music, history, philosophy, and politics. At the age of 12, she was consecrated by Nicetas, Bogomil Bishop of Constantinople and Patriarch of the Cathars during the synod of Saint-Félix de Lauragais. For those unfamiliar with the Cathars, they were a sect of Christianity that did not adhere to the Roman Catholic doctrine and were seen as heretical by the Roman church.

In 1175, she was married to Jourdain III, the Lord of L'Isle-Jourdain, the Viscount of Gimoez, which was an unusual older age for her to marry. Although the marriage seems to have been politically motivated, as they were at that time, the marriage was fruitful and joyful as they had 6 children:

Little is known about Esclarmonde during the 25 years of marriage, but there are some stories. Anti-Cathar beliefs had started before they were married. In 1163, during the Council of Tours, Pope Alexander III condemned Catharism as heresy and by 1180 persecution was common. In 1181, a papal legate attacked Castres and Lavaur (both East of Toulouse and South of Albi). Legend has it that with these attacks, Esclarmonde helped the survivors, the refugees, flee from the onslaught of the Roman Catholic Church. She was accused of heresy but was defended by her husband (who was Roman Catholic).

In 1200, Jourdain III died and Esclarmonde devoted her life to Catharism. Jourdain had bequeathed his titles and property to Esclarmonde, but she turned it over to her children. In 1204, she received by Guilhabert de Castres, the Cathar Bishop, the Consolamentum, a sacrament taken for those becoming a Cathar Prefect. This action speaks highly of her character and resolve as most widows of nobility would live out their lives in comfort and she was choosing not only a life of service, but one that was facing severe backlash and persecution. As a Prefect, she was trained in the art of healing, medicine, herblore, weaving, agriculture, geology, mathematics, and astronomy as well as the sacred texts of the Cathars. As a Prefect of her faith, she established girls’ schools, hospitals, and homes for aging Prefects.

In 1204, Esclarmonde, foreseeing further aggression by the Catholics, suggested to the nobility to fortify their castles, and one such lord to take her words seriously was Raymond de Pereille who then owned Montségur.

Esclaramonde was said to have attended or even organized the Council of Pamiers in 1207 where a debate between Catholics and Cathars occurred. The Catholics were represented by the Bishop of Toulouse, the Bishop of Navarre, the Abbott of the Augustinians in Pamiers, and several others, including Dominic Guzman, the founder of the Dominican order who would lead the Inquisition. For the Cathars, there were several Prefects, both men and women, including Esclarmonde. There seem to be conflicts as to her contribution to the Council as one account says she delivered a brilliant lecture while another account says she was shut down and prevented from speaking by the Catholics who would not allow a woman to speak about matters they saw above her gender. 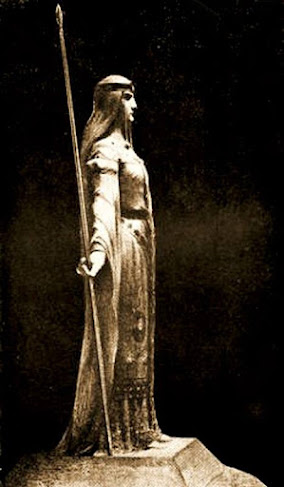 The years following saw the ruthless hand of ignorance and the destruction of brutal force with the Albigensian Crusade that would officially last until 1129. The name Albigensian comes from the town of Albi which was a center of Catharism.

Esclarmonde became a rebel and even had a bounty put on her head by the Pope and became a symbol of resistance. Through the years she avoided capture and assisted surviving Cathars. This Crusade was different as it was against Christians and fellow Europeans, but the Occitania was rich in resources, culture, and wealth, and the Catholic Army composed of the dregs of society pillaged and plundered their way through the region. In the face of such wanton destruction, many Cathars fled the Montségur which would fall to the Catholics, but not until 1244.

Some believe that Esclarmonde died in 1215, but some believe that the story was invented by her brother, Raymond-Roger, who was trying to get his lands in Foix restored to him as they had been taken during the crusade and given over to the papal legate. There is one legend that she attended the wedding of Roger-Bernard, the new Count of Foix and her nephew, to Ermengarde de Narbonne in 1232. In this legend, it is believed that she died in 1240 which would mean she was into her 80s well above the average lifespan of the time. No trace of her body or burial has ever been found.

Esclarmonde de Foix leaves a legacy of feminine strength, leadership, the Cathar religion, and of religious freedom. Such was her character that she is mentioned in several pieces of poetry and literature to include being a Keeper of the Holy Grail legends and in Gnostic revival literature. Her importance was so strong that even in recent years the Roman Catholic Church has opposed any statue or monument being made in her honor. Supposedly there is a statue of her in Foix, but I cannot find anything to corroborate this.