Hidden between Fleet Street and the River Thames is the iconic Temple Church, a location on my travel bucket list, known for its unorthodox round shape (one of only 5 in England). Originally built as the English headquarters for the medieval Knights Templar, it is now used as the private chapel for two Inns of Court. While Temple Church played a part in English history, it was brought back to the public's attention with the publication of the Dan Brown novel, The DaVinci Code, and the corresponding film with the same name.

During his tenure as the first Grand Master of the Templar Order, Hugh de Payens started a tour through Western Europe to grow the order, in number and authority. Toward the end of 1128, Hugh visited England and Scotland. While in London, he established a headquarters for the British Templars in Holborn (~0.5 miles north of its current location). Around 1161, the Templars had to move their headquarters when their original one couldn't hold the ever-expanding membership. They moved to where Temple Church resides today, but, in the Middle Ages, would've included barracks, residences, council chambers (for meetings), training facilities, dining hall, and recreational grounds. It needed a large complex as novices and some brothers were not permitted to go into the city proper without permission of the Master of the Temple, who was in charge of the Templars.

Temple Church itself is comprised of two sections called "The Round" and "The Chancel". The Round was the original nave and is based upon the Church of the Holy Sepulchre in Jerusalem. The Round was consecrated on February 10, 1185, to Mary Theotokos by Heraclius, the Patriarch of Jerusalem.

Going around the 55-ft diameter nave are free-standing column marbles. A column that is built into the wall itself is called an "Engaged column" while one that is not is called a "Free-standing column." The Chancel would be built about a half-century later by the King of England. The Chancel is a rectangular structure with a central aisle and two side aisles of equal width. The Chancel was built over the original choir of Temple Church after Henry III had originally desired to be buried there although he would be buried in Westminster Abbey; one of Henry III's sons is buried in the Chancel. The Chancel was consecrated on Ascension Day 1240.

Temple Church was used by the Templars for Templar initiation ceremonies where new knights would enter and take their monastic vows. The exact rites are unknown as they were jealously guarded and such secrecy ultimately fed the fire during their suppression in the 14th century. As it was with most Templar headquarters and preceptories, Temple Church would also serve as a depository bank which contributed to the monumental wealth of the Templars that made them a target of the tyrannical French King and the downfall of the Templars. This property was also used as a residence for kings and papal legates (ambassadors).

The power of the Templars in England saved them from the same treatment the French Templars received after October 13, 1307. Edward II initially refused to comply with the request to arrest all Templars and it wasn't until January 1308 that some arrests occurred. When the Templars were dissolved by the Papacy, the Templar property in England wasn't turned over to the Church as one might think, but rather was taken control of by the Crown.

Temple Church was given to the Knights Hospitallers in 1324 who then let two colleges of lawyers rent them out. These two colleges evolved into the Inner Temple and Middle Temple which own Temple Church today. In 1540, Henry VIII dissolved all of the religious houses/orders, and Temple Church once again fell back under the British Crown. Once under Henry's control, he put an Anglican priest over it and styled them "Master of the Temple" in memory of the Templar commanding officer.

Temple Church would go on to serve as the location for the Battle of the Pulpits, a theological conflict between Anglicans and Calvinists. In 1608, King James I granted Temple Church back to Inner Temple and Middle Temple in perpetuity as long as they agreed to support and maintain the buildings.

Being constructed of stone, Temple Church survived the Great Fire in 1666, but was still given some renovations during the 17th century including the installation of an organ. It went through another restoration in 1841, 1862, and 1945-1958. The last date was due to extensive damage the church took during a WWII air raid. The church was rededicated in November 1958. 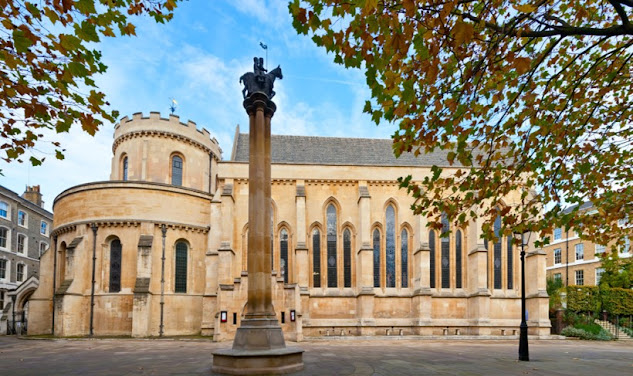 You enter Temple Church through a southern entrance that is adorned in Norman style that has a column on either side that is adorned with roses, saints, monarchs, etc. Looking around the nave, there are carvings of beasts and humans in different states of being and salvation/damnation. High windows allow plenty of light to flood the nave. The windows were some of the renovations, the originals being destroyed during the Nazi air raids.

Going inside you are greeted with a high arched ceiling, free-standing marble columns, and effigies embedded into the floors. To the East of the Round is the Chancel which is supported by Gothic-style arches and columns that allow light to illuminate the room. 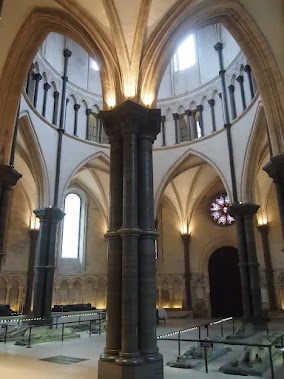 As the fictional character Robert Langdon discovered, the effigies are not tombs or graves. Effigies are defined as an image, sculptures, models, or representations of a person. In the case of the effigies of Temple Church, they are stone carvings of knights who appear poised for battle. There are nine stone knights on the floor of the Round. Now, being in a Templar building one would think that all of the effigies depict a Templar knight, but this is disputed by some scholars. However, the use of 9 could be a tribute to the founders of the Templar order.

Today the Church is still owned and used by the two societies of lawyers as their private chapel. The church holds regular church services including Communion and Mattins (morning prayer service). They also allow for wedding ceremonies, but only for members of the Inner Temple and Middle Temple.

The acoustics of Temple Church has also made it famous for its music. The church holds performances of organ and choir music, but it has also attracted secular musicians. It has a professional all-male choir that wears, due to the special status of Temple Church, scarlet cassocks.

Temple Church stands as a testimony of the medieval Templars who built it and all members of the Valiant and Magnanimous Order of the Temple should seek to visit it. Temple Church is less than one mile (roughly a 14-minute walk) from the United Grand Lodge of England. 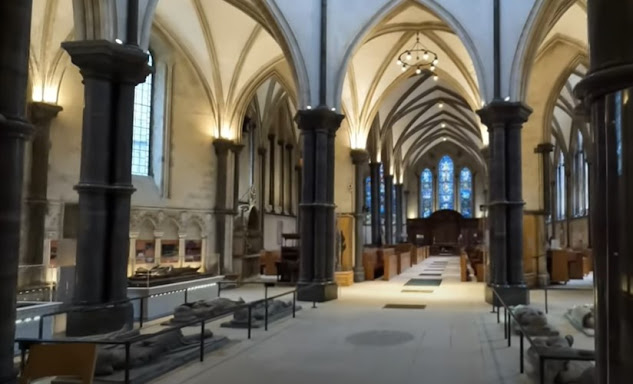 8. Temple Church. (n.d.). Retrieved from The Honourable Society of the Middle Temple: https://www.middletemple.org.uk/about-us/temple-church