Not getting into partisan politics, but with the recent announcement of former President Trump that he's running again for President, a number of silly conspiracies have popped back up one of which is that Donald Trump is a Freemason. This theory comes in four different ways or sources: the Trump coat-of-arms, his supposedly saying "I'm a Mason", his holding an envelope that is secretly a Masonic apron, and his hand gestures. 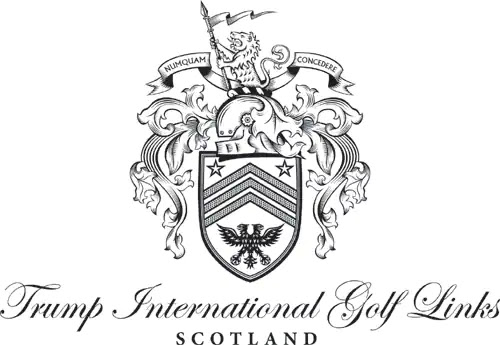 In 2008, the Trump International Golf Links established a championship golf course in Aberdeen, Scotland, but one thing ran them afoul of the authorities and that was the use of unregistered heraldry the company used in their promotions. After four years, the Trump organization won the right and registered their coat-of-arms (see above):

A shield with three chevrons, two stars, and a double-headed eagle clutching golf balls in its talons, with a helmet above the shield and a crest of a lion waving a flag with the words "NUMQUAM CONCEDERE" (Never concede, never give up, or never give in).

A spokesman for Trump International stated the following about the coat-of-arms:

Three chevronels are used to denote the sky, sand dunes and sea — the essential components of the [golf resort] site — and the double-sided eagle represents the dual nature and nationality of Trump’s heritage. The eagle clutches golf balls, making reference to the great game of golf, and the motto 'Numquam Concedere' is Latin for 'Never Give Up' — Trump's philosophy.

Now anti-Masons and conspiracy theorists say that the use of a double-headed eagle is proof that he is not just a Mason, but a 33° [Scottish Rite] Mason because to them that is the end-all degree of Freemasonry where the sinister secrets of Freemasonry supposedly revealed [queue spooky music]. One even went so far as to say that it is actually a “double-headed phoenix” and that it is “one of the most prominent logos of freemasonry.”

The double-headed eagle has long been a symbol of imperialism and has been used by the Byzantine Empire, Holy Roman Empire, and Russian/Tsarist Empire. For these empires, it was intended to represent dominion over lands in the East and West, but this symbol was also used with the Hittites, Sumerians, and pre-Pharaonic Egypt. This symbol was also used by some Islamic Sultanates in the Middle Ages, but after the Crusades, it became popularized in the Western world by its use by the Holy Roman Empire, and today has been used by several European nations in their seals, flags, or coat-of-arms.

In paganism, the eagle was used to depict the sun or the supreme god of a pantheon. In Christianity, one of the Hayyoth that sits around the Throne of God is depicted as having the head of an eagle. The Eagle is said to also represent the Gospel of John as his Gospel deals with Christ and the Word of God as the Eagle was to the ancients a divine messenger which also makes it associated with the archangel Gabriel whose name means “God is my Strength” and often served as a Messenger of the Most High God. The double-headed eagle is a symbol of union, dominion, and sovereignty; and is clearly a dualistic and alchemical symbol, and there is much more to this symbol, but that is a discussion for another time

For Freemasonry, the double-headed eagle is used by the Ancient & Accepted Scottish Rite where it’s often depicted surmounted by an imperial crown. The earliest Masonic use is dated to 1758 with the group known as the “Emperors of the East and West”, the progenitor to the Ancient & Accepted Scottish Rite, who granted Stephen Morin a patent that brought this system of degrees to the Americas.

The double-headed eagle is an ancient symbol that was long used before it was used in Scottish Rite Freemasonry and the use thereof doesn't equate to Masonic affiliation. Trump's use of it seems to be nothing more than his company's attempt to give the Trump name a grandiose appearance as it spread to Europe.

During his tenure as President of the United States, I would see the claim on Twitter or YouTube that Donald Trump stated that he was, in fact, a Mason. They'd link audio of Trump talking with Pastor Scott and his wife who met with him during African American History Month. After Belinda Scott introduced herself, Trump started the following conversation with her and Past Scott:

MS. SCOTT:  I’m Belinda Scott, Darrell’s wife.  New Spirit Revival Center from Cleveland, Ohio.  Pastor of New Spirit.  Great amount of support in the African American community where we are.  We love the Lord, we love our new President, and we are praying for our President on a regular basis.

THE PRESIDENT:  You know, the one thing I didn’t understand about Belinda — I thought they were married maybe five or six years, because look how they look so young.  (Laughter.)  Should you say how many years you’ve been married?

PASTOR SCOTT:  We’ve been together for 38.

THE PRESIDENT:  That’s actually amazing.  I wouldn’t have known.

The conversation between the President and Pastor Scott continues for a few more minutes before moving on to other attendees. However, it was the President's last line where he supposedly said, "I'm a Mason." Without having seen the transcript, I was confused by the audio as the conversation was about how long the Pastor had been married and then anti-Masons would have us believe that Trump then just blurted "I'm a Mason." That would not have made any sense. His expressing amazement at the longevity of their marriage makes sense and fits into the context of the conversation.

In June 2018, President Trump hosted Kim Yong Chol, a senior North Korean official, who delivered a letter from Kim Jong Un, the North Korean dictator, that was very large, to say the least. Trump took a picture (see below) holding this envelope and the conspiratards erupted all over the internet stating that Trump was actually holding a Masonic apron. It goes without saying that an envelope is not an apron and nothing Masonic would be coming from North Korea where Freemasonry is non-existent, and, in my opinion, Freemasonry is contrary to the ideals of the North Korean regime. 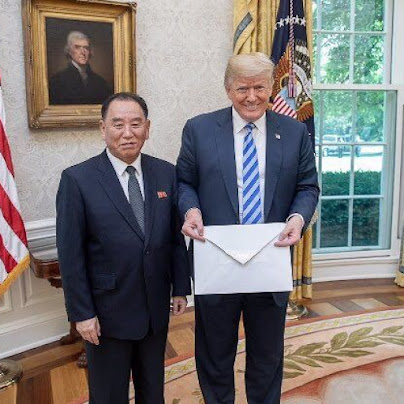 Trump is a very animated speaker and has given the conspiratards an ample amount to talk about. While sitting Trump has been photographed with his hands held as pictured here. Apparently, anti-Masons and conspiracy theorists think this indicates that he is a Mason or at least involved with the infamous "new world order." When I asked one anti-Mason what proof he had that this was Masonic, they Tweeted a picture of signs used in the Ordo Templi Orientis (OTO), but anti-Masons do not accept that the OTO is not Masonic or an appendant body of Freemasonry. Now to be fair, they also think that using the "OK" gesture is the "666 gesture" and makes someone a Mason while others erroneously think it is a symbol of white supremacy. 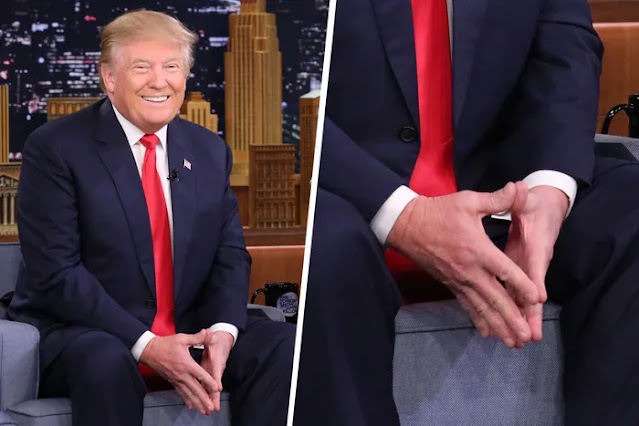 Doing some research into hand gestures, it is called "steepling" or the "steeple hand gesture" as your hand often forms something like a church steeple when holding your hand in this fashion. This hand gesture is a sign of confidence, authority, and expertise, but can also come across as a sign of overconfidence or arrogance. It goes without saying that Trump is someone who comes across as confident, albeit arrogant at times.

The fact is that Donald Trump is not a Mason and none of the foolish theories come close to meeting the burden of proof to show otherwise.